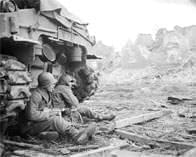 George Myers grew up in Hoopeston on a family farm with his widowed mom. He enrolled in the U of I to major in agriculture, thinking he could learn something to make the farm more successful. Myers served on an LST in the Pacific from 1944 to 1946. He didn’t get shot at, but he recalls being scared. “I still remember the full moon on the water and how it seemed like we were visible to everybody, but we couldn’t see a thing,” he said. Myers has been president of the national LST Association. Of the some 100 men on his ship, only about 7 are left.

Jim Fisher served in the U.S. Navy on Landing Ship Tank 475. He fought in the battles of New Britain, Leyte Gulf, Lingayen Gulf and others in the South Pacific, Philippines, Borneo and New Guinea.

Jesse Dowell volunteered to join the U.S. Navy Air Corps, serving from August 1944 to August 1947. He trained for the invasion of Japan, going to school double time to be prepared as soon as possible. He completed bombing practice with a new secret radar bombsite, which could bomb for the first time at night in total darkness. The surrender of Japan made the invasion unnecessary.

George Boyd was 7 years old and living in Urbana when Pearl Harbor was attacked. His homefront memories of the war years are sharp and reflect much of what children living in this country experienced. He did the things children did, playing and going to movies and helping with liberty gardens. He gives a good picture of life in middle America where everyone was involved in some way in the war effort. At the same time he heard adults talk and radio reports and knew when neighbors or family members were hurt or had died in battles. Children of this period in our history were changed by what was happening and in some ways were adults well before they might have been if the war had not happened.

Alice Lain served in the WAVES Women’s Navy Reserves from June 1944 to March 1946. She installed radar in the torpedo bomber Avenger and the Wildcat fighter.

Eugene Houser served as clerk typist in an Army Replacement Battalion in the Mediterranean Theater. From 1944 to 1946, he worked in a unit that processed incoming replacement troops and cut orders for troops being discharged. He says he didn’t do anything heroic, but like all Americans, he was deeply involved in the war effort. He left his father who had some physical handicaps to run the family farm because, as he puts it, he couldn’t have faced himself if he hadn’t gone into the Army when called. His story reflects those of many of the behind-the-line soldiers. His great respect for all who served is obvious throughout his interview. Houser talks about the men he met during these years. Years after the war, he and several other veterans collected stories of veterans, men and women, from the Farmer City, Ill., area into a book they titled “Their Roles Remembered.”