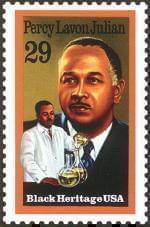 A lecture on race and prejudice at the campus of the University of Illinois at Urbana-Champaign by Percy Lavon Julian, one of the first American American to receive a doctorate in Chemistry. Dr. Julian begins by discussing the definition of prejudice: a judgment arrived at without sufficient thought or knowledge, and help without reasonable grounds. He discusses differences people perceive based on race, class, dress, geography, tribe, etc. People we consider within our territory we characterize as friends, but people outside our territory are the enemy. The further away they are, the worse we consider them. “We and our kind are alright. All that is strange or different is dangerous.”

He then discusses prejudices based on race, due partially to propaganda and misunderstanding. He says the word “race” is used very loosely, even by our leading authorities. For example, there is no French race, Aryan race, or Jewish race, but people use these terms. The similarities between all the existing human beings are much greater then the differences