Celebrating a life with memorial gifts to WILL

When Wade Abels of Bloomington died in March, his wife, Jeanine, planned a celebration of his life. At a memorial service, she displayed photographs of him and also of the buildings that he had worked on as an architect, including the education building at the University of Illinois and the Performing Arts Center at Governors State University. 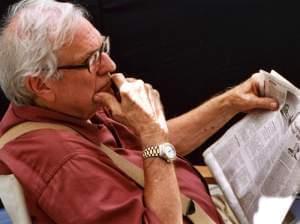 In his obituary, she also suggested that people who wanted to make memorial gifts could make a donation to Illinois Public Media in her husband’s honor. “I thought it was appropriate since we were celebrating his life, and public television was important to him.” WILL-TV programs, particularly British comedies, The PBS NewsHour and Masterpiece, brought so much enjoyment to his life, she said.

The Abels’ daughter, Anne Santucci, of Highland Park, Ill., said that for as long as she could remember, public television was the only TV her dad watched. “He loved Nature and Nova and Frontline. He and my son had wonderful conversations about all of those programs,” she said. When she was growing up, the family watched Monty Python every Sunday night.

“He loved the political shows, and he kept up with everything. But in the last two or three years of his life shows like Last of the Summer Wine and Keeping Up Appearances, those things made his life bearable. He needed something to make him laugh and smile.”

Wade Abels was a member of the Bloomington architecture firm of Hilfinger, Asbury, Cufaude and Abels. He did detailed architectural drawings for the U of I education building, working collaboratively with design architect A. Richard Williams. During Abels’ 15-year tenure as the principal in charge for architectural work at Governors State in University Park, he was proudest of the university’s performing arts center, a seven-story brick-and-glass building completed in December 1995.

Public service was Wade’s first priority in addition to family, Anne said. He served for many years on the Bloomington Zoning Board of Appeals and on the Bloomington Beautification Committee. “He really felt that everyone deserved to have beautiful spaces and access to those spaces,” she said.

Daughter Amy Carey, of Grand Rapids, Mich., said she remembers her dad, listening to the news on public radio, as well as reading several newspapers. “He was one of the most well-informed people I’ve ever known,” she said. Yet, she said he was quiet and unassuming, and had an incredible work ethic.  “He often came home for dinner and went back to the office, not because he was a work-a-holic but because he wanted to do everything possible for his clients,” she said.

Jeanine, a collage artist who uses hand-screened Asian papers, acrylics and watercolors, misses her life partner, but stays busy creating one-of-a kind art cards and larger pieces that reflect her interest in Asian philosophy. And she still watches Masterpiece and other WILL-TV shows she and her husband loved.