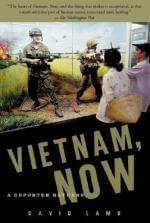 When he left war-ravaged Vietnam years ago, journalist David Lamb declared "I didn't care if I ever saw the wretched country again." But in 1997, he found himself living in Hanoi, in charge of the Los Angeles Times's first peacetime bureau and in the midst of a country on the move, as it progressed toward a free-market economy and divorced itself from the restrictive, isolationist policies established at the end of the war.

Lamb reveals a rich and culturally diverse people as they share their memories of the country's past, and their hopes for a peacetime future. A portrait of a beautiful country and a remarkable, determined people, Vietnam, Now is a personal journey that will change the way we think of Vietnam, and perhaps the war as well.