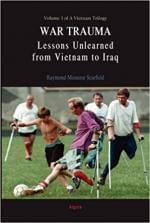 In his book War Trauma, Raymond Monsour Scurfield draws on the experience of prior wars for valuable insights to help people who are now in the military or in the healing professions, and their families and communities, to deal with todays realities of combat and its aftermath — which so often entails PTSD (post-traumatic stresss syndrome), depression and the risk of suicide.

The book is part three in A Vietnam Trilogy, which studies the psychiatric impact of war on soldiers and veterans, and their families. The effects go on for decades after the violence occurred, and we are still just learning to understand the depth and variety of problems it can cause. This third volume looks at what military and mental health professionals — and the Veterans Administration (VA) — should have learned from the Vietnam War in order to better protect American servicemen and servicewomen in later conflicts and to help them recover afterwards. The Persian Gulf War, for instance, had an immense impact on veterans of all wars. The author was a national faculty member for joint VA-DOD training programs to enhance mental health response readiness for receiving anticipated medical and psychiatric casualties from the Persian Gulf War. What he found was a resurgence of selective amnesia and denial about the true impact of war. Scurfield notes, "Chillingly, what happened in Vietnam in 1968–69 regarding psychiatric casualties has enormous parallels to what is happening today regarding U.S. psychiatric casualties from the Iraq War."