The 2012 Census of Agriculture hold many unique facts. Researchers at the University of Illinois have been digging through the numbers to find some plumbs. Todd Gleason reports it seems an old adage is borne out by the figures.

The Census of Agriculture defines a farm as any place from which $1,000 or more of agricultural products were produced and sold, or normally would

have been sold, during the reference year. The Census classifies each farm's production specialization based on the North American Industry Classification System (NAICS). A "Livestock" farm is defined as any farm from which the majority of farm sales are from the production of beef cattle, feedlots, dairy, hog, poultry, sheep, or animal aquaculture. A "Vegetable, fruit, tree nut, or horticulture" farm includes farms that primarily produce vegetables, melons, fruit and tree nuts, green house, nursery, or floriculture. And the final category "Crop" includes oilseed, grain, tobacco, and other crops. 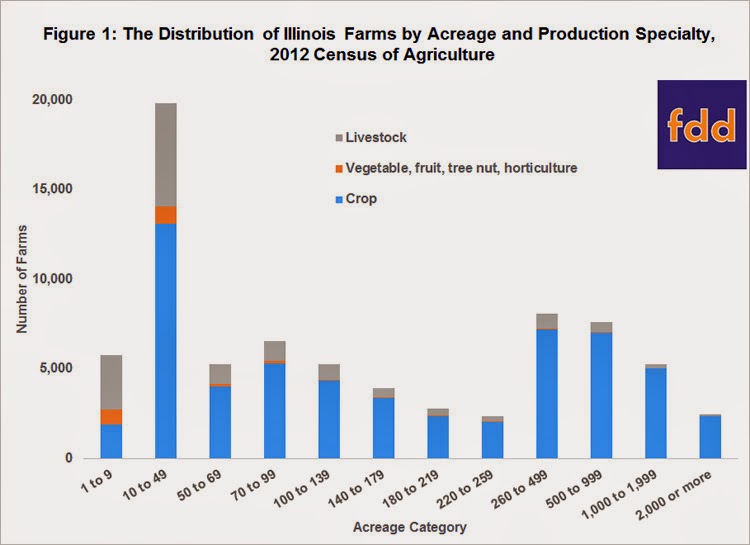 The majority of small farms are livestock farms.

Another interesting observation that can be made with respect to the distribution of farm size is that while the majority of Illinois farms are small, large farms account for the majority of the total value of agricultural production. About 50 percent of Illinois farms span fewer than 100 acres. However, all of the farms with fewer than 100 acres produced only 6.6% of the States' $17.2 billion in agricultural products in 2012. 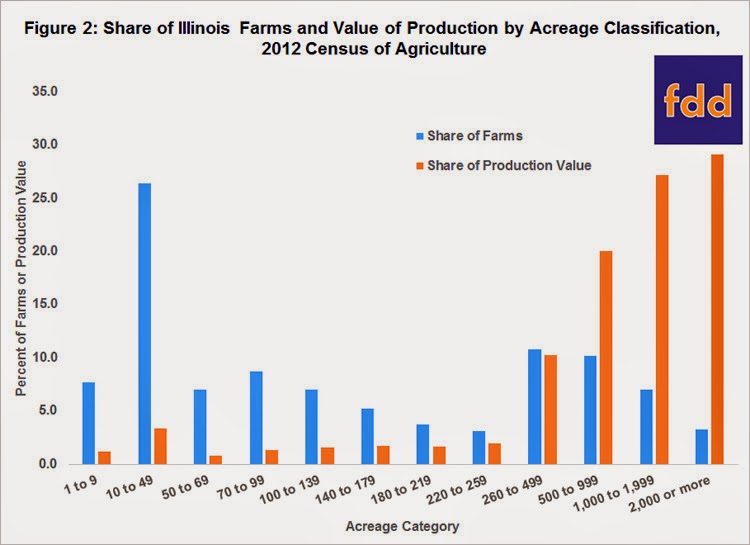 A popular rule of thumb in business, sometimes called the Pareto principle or 80-20 rule, states that roughly 80% of the effects come from 20% of the causes. For example, it is often suggested that in agriculture, 80% of commodities are produced by only 20% of farms. The 2012 Census of Agriculture provides some evidence in support of that notion. In 2012, 20.4% of Illinois farms operated more than 500 acres, however these farms produced 76.2% of the total value of production.