Corn farmers across the planet are bracing themselves for the USDA report due out at the end of this month. The agency has been surveying farmers in the Midwest to see how many acres of corn they expect to plant. That’s called the Prospective Plantings report.

The other big item due at 11am central Thursday, March 29th is the quarterly grain stocks number. It is nearly a census of some 9000 grain elevators and storage facilities across the United States to evaluate how much crop remains on hand.

The tricky part of making this calculation says University of Illinois Agricultural Economist Todd Hubbs is figuring the feed and residual usage for the livestock sector.

He says most of the other use categories can be tracked, but that Feed and Residual category is different, “There is really no good idea as we move through the marketing year what that is going to be and I look at historical data and what the USDA is saying the number is going to be. USDA is currently saying 5.55 billion bushels. If that is right we should see, based on some historical data, around 1.68 billion bushels of disappearance for the second quarter.” 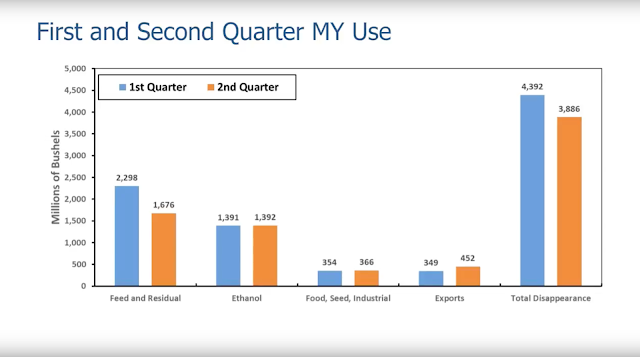 The number of bushels on hand can be roughly calculated prior to the release of the report. This is because the USDA World Agricultural Supply and Demand Estimates report shows how many bushels of corn were in the United States when the marketing year began, 16.9 billion (1). The number of bushels used to make ethanol (2) and for export (3) are subtracted from the 16.9. There is no good way to track how many bushels have actually been consumed by livestock. However, USDA has an estimated consumption number for the year. It is 5.55 billion bushels (4). 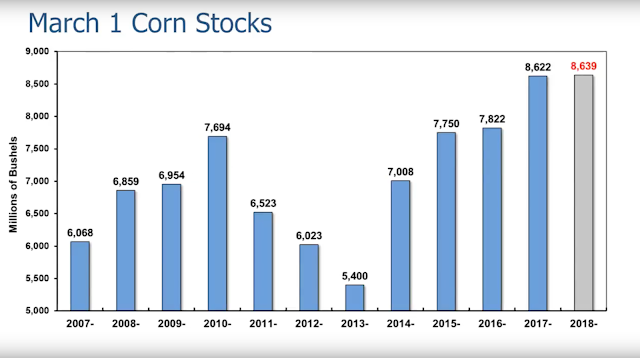 From these four numbers, the March 1 grain stocks figure can be calculated says Todd Hubbs. His estimate is 8.639 billion bushels of corn. If it is at this level, Hubbs says the March 1 stocks would be 17 million bushels above last year’s corn stocks estimate at this same time.