The price of soybeans rallied out of the October USDA Crop Production report. This is because it showed fewer acres of the crop would be harvested this season. University of Illinois analyst Todd Hubbs thinks the upside potential is limited, “I don’t know if this thing is sustainable. It doesn’t feel that way to me. Moving through the rest of the harvest year and towards the start of 2019, I think we are going to have to see some kind of production issues in the South American crop or if China breaks and doesn’t hold out completely on taking U.S. soybeans before we see a sustained upward movement. I think the upside potential is limited.”

Limited because, even if this year’s crop is hurt some by the poor harvest conditions so far it will remain a record breaker. Right now USDA has it at 4.7 billion bushels. There are plenty of soybeans in the world. That makes it a buyers market and price is going to depend a whole lot upon how many U.S soybeans can be exported says Hubbs, “Basically it doesn’t look like other importers are picking up the loss of the Chinese market like we would like them to.” 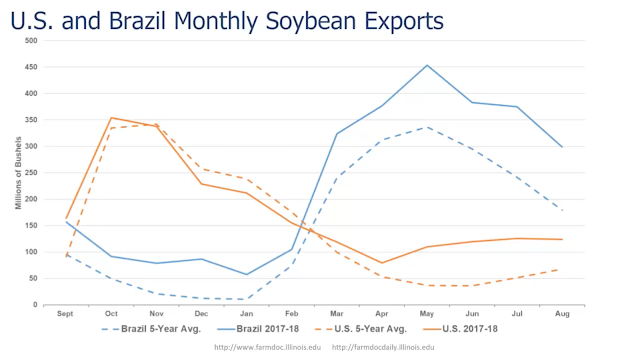 When you look at last year and the huge amount of exports Brazil did in the second-half of the marketing year, and even the strength in the latter quarter of the U.S. marketing year, you can see tariff action picking up in forward buying and movement of soybeans thinks the U of I number cruncher. So far in this marketing year we haven’t seen much Chinese movement. In the last export inspections report about 5 million bushels went to China. Still, they seem to be sitting it out and not buying soybean from the United States. This is happening even though the price of U.S. soybeans, when compared to the price of Brazilian soybeans delivered to China, are very competitive. 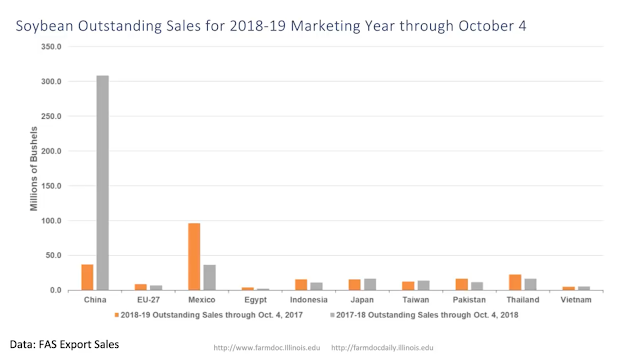 It all brings Hubbs back to that word “limited”. He sees the upside price potential in soybeans as limited by an enormous supply in the United States and around the world, “If you are thinking about marketing soybeans, I’d take a good hard look at the price we are seeing right now because ending stocks are set at 88 5 million bushels for the 2018/19 marketing year and barring some kind of uptick in exports from the U.S. that may be the low end of reasonable projections depending on what the crop ends up doing here in the U.S.”

You may read more about commodity marketing from Todd Hubbs on the farmdocDaily website.