Todd Gleason reports on the move away from wheat and towards soybeans.

Corn is king in the United States. Soybean has been on a swift move upward. And wheat acreage has been on the decline for about 40 years. About half-way through those 4 decades two important things happened. Congress passed the 1996 farm bill - often called Freedom to Farm because it eliminated the last vestiges of supply controls for program crops and Monsanto introduced Round-Up Ready soybeans, that was 1995. The latter made it a whole lot easier to raise beans and the former, says University of Illinois Agricultural Economist Gary Schnitkey, let farmers react to the market. 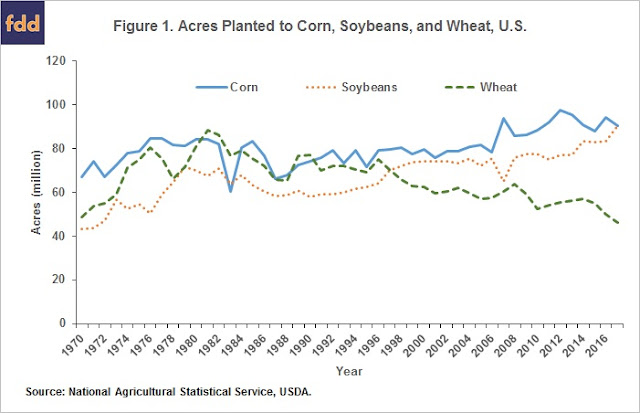 From 1996 to 2012 U.S. farmers increased soybean acreage by 20 percent, corn acreage was up a bit more, but not much, and wheat acreage plummeted 36 percent. Schnitkey says much of the change can be explained by just looking at the relative profitability of the crops. Corn and soybeans are more profitable than wheat. Most would likely say the reason wheat acreage has declined in the U.S. is because of the ethanol build-out. It is, but it’s also not says Schnitkey, "You can attribute that to a number of factors. Probably the bigger one is that corn has increased its yields at a pace relatively faster than wheat. This has caused the relative profitability of corn to be higher than wheat and corn has taken over the feed grain market.

This has caused the relative profitability of corn to be higher than wheat and corn has taken over the feed grain market.

Wheat is/was the primary feed grain for much of the world. In the United States corn is fed to livestock and used to make ethanol. It is best managed when rotated with other crops, the most profitable of which is soybean.

This past year U.S. farmers planted about 90 million acres of corn and 90 million acres of soybeans. It is a new trend, says the University of Illinois ag economist, driven by continued strong export growth for soybean. The United States is projected to export over 50 percent of the soybean crop this marketing year.

Soybean acreage has substantially gained on corn acreage since 2012. While last year the acreage planted was equal, U.S. farmers actually harvested about 6 million more of the soybean acres than they did of corn. So, by harvested acreage soybeans are the number one crop in the United States and it’s not that first time that has happened. The soybean was king in 2015 as well.