The University of Illinois’ Preservation unit recently digitized a collection of transcription discs (recordings of radio broadcasts), and WILL has spent some time cataloging this material so it can be available online. Most of the discs in this particular collection focused on broadcasts and recordings from the late 1940s and early 1950s. Perusing through the titles, it became clear that rhetoric about the Cold War, Communism and international relations weaved its way through almost everything. This collection focuses on recordings that deal directly with the political climate--at the local level (talks given by professors at the U of I), the state level (atomic disaster preparedness in the state of Illinois) and the national level (President Truman speaking about U.S. objectives in Korea).

From 1950-1953, the United States was embroiled in the Korean War, defending South Korea along the 38th Parallel from Soviet Russia-supported North Korea, as well as the Communist regime in China. Later recognized as one of the “hot spots” during the decades-long Cold War with the former Soviet Union, Americans were on edge, poised for the possibility of World War III.

Setting the stage for much of the rhetoric surrounding the early stages of the Cold War were the presidential speeches. Broadcast from the White House on September 1, 1950, President Harry S. Truman discusses the objectives for the U.S. military presence in Korea. He talks about the importance of cooperation between all free nations; denounced the Soviet Union for its unwillingness to cooperate in an international effort to work toward a just and lasting peace and freedom; and talked about the sacrifices citizens need to make on the homefront to support the effort in Korea. As time went on, more of the rhetoric would switch focus from Korea to the Soviet Union, as seen in the topics discussed at the University of Illinois and surrounding areas in the coming years.

WHAT TO DO IN CASE OF AN ATOMIC ATTACK

Perhaps the greatest threat facing the United States (outside the threat of Communism spreading further west) was atomic warfare. After the U.S. dropped two atomic bombs on Japan to end World War II in 1945, the world was all too familiar with the mass-destruction capabilities of these weapons. The U.S. government revealed in 1949 that the Russian military was in possession of their own atomic bombs, and the threat of launching them at the United States was very real. In response to this threat, Americans did their best to prepare for an atomic bomb attack. The images of school children practicing “duck and cover” under their desks are now iconic. But many large cities took preparation very seriously, including Chicago, whose Civil Defense organization completed a preparedness assessment to determine how the Windy City would deal with a potential attack. 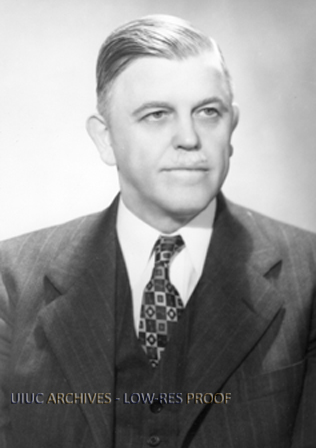 On Dec. 1, 1950, members of the Chicago Civil Defense committee and an engineer with the 5th Army Division spoke at Northwestern University in Evanston, Illinois, on “What to do in case of Atomic Attack.” The talk was part of Northwestern’s “The Reviewing Stand” radio program, and it detailed the emergency-preparedness test-run Chicago had conducted.

“We can hope for the best, but we better prepare for the worst.”

The panel also discussed the primary ways an atomic bomb attack may happen (dropped by airplane, guided missile weapons, shipped in via freight and assembled in the U.S., etc.). The investigation concluded that Chicago would be much better prepared to deal with the fallout from an atomic bomb than Hiroshima, greatly reducing casualties and illness from radiation poisoning.

“...[an] attack would be to destroy or diminish our capacity and our will to resist--if you can bring it about by panic just by threatening to attack, you can reach that goal without actually dropping the bomb.”

Beyond the technical aspects of persevering through an atomic attack, the panel also reinforced the rhetoric common in that time, as it is today: Americans must band together to ensure victory. The panel had suggestions for ways every member of a community can play a part in the country’s victory, including becoming proficient in the First Aid techniques taught by the American Red Cross, not partaking in rumors (said to be a psychological tool employed with the Communists), and building personal bomb shelters if able. Ultimately, the panel’s rhetoric encourages citizens that remaining calm is the best defense, as a panicked citizenry means the Soviets have won without so much as firing a missile.

Video courtesy of archive.org under the Creative Commons license. Duck and Cover was a social guidance film produced in 1951 by the United States federal government's Civil Defense branch shortly after the Soviet Union began nuclear testing. Written by Raymond J. Mauer and directed by Anthony Rizzo of Archer Productions and made with the help of schoolchildren from New York City and Astoria, New York, it was shown in schools as the cornerstone of the government's "duck and cover" public awareness campaign. The movie states that nuclear war could happen at any time without warning, and U.S. citizens should keep this constantly in mind and be ever ready.

Today’s security threats come less from a large-scale military attack and more from concentrated incidents of terrorism. However, much of the rhetoric is the same when discussing ways Americans can prepare for and defend themselves from terrorist attacks, with much emphasis placed on keeping daily activity as normal as possible so that the “terrorists will not win.”

Currently, Homeland Security's National Terrorism Advisory System uses different threat levels to warn the American public about terrorist activity. The rhetoric still heavily emphasizes the individual’s responsibility to one another and our country in protecting against terrorist attacks:

“This system will more effectively communicate information about terrorist threats by providing timely, detailed information to the public, government agencies, first responders, airports and other transportation hubs, and the private sector. It recognizes that Americans all share responsibility for the nation's security, and should always be aware of the heightened risk of terrorist attack in the United States and what they should do.”

FEAR FOR BREAKFAST: THE MENACE OF COMMUNISM & OTHER COLD WAR RHETORIC As tensions remained high between the United States and the Soviets, rhetoric played an important role in shaping the perceptions and images of our “enemies,” a people far-removed geographically from the United States. Several speeches delivered on U of I’s campus in 1950 and 1951 reflect the vocabulary and sentiment of the time.

To put the rhetoric and attitudes of the day into a scientific perspective, University of Illinois professor Harry A. Grace delivered a speech on campus on April 24, 1950, discussing the psychology behind attitudes toward other countries. The psychology professor discussed research being done to learn more about global attitudes toward international relations and peace. In light of the United Nations passing the Universal Declaration of Human Rights, he discussed the importance of researching attitudes, as tensions that lead to them may be reduced when we have a better understanding of one another. His lecture touched on what can be done on the global, federal, state and community levels, as well as the types of psycho-political research being done on campus and at other institutions, including U of I’s Dr. Oscar Lewis’ work in the then-burgeoning anthropology department.

“[Russia] hates us, and every decent thing we’ve ever done for them has increased their hate for us.”

While Professor Grace had placed a call for digging deeper when it came to understanding our attitudes toward other nations, particularly in this time of unrest, others on campus spoke directly from experience living abroad. On Nov. 13, 1950, Brig. Gen. Frank L. Howley, former director of the U.S. military government in Berlin after World War II, visited campus to discuss his experiences with the Russians and the state of Communism during his time in Europe. He likened the Russians and Communism to Murder Inc., and compared countries cooperating with Russia to members of an organized gang: scared of the operation, but close enough to it that they continue to carry out the system with complete brutality. He discussed the United States’ efforts to appease and compromise with Russia, but to no avail. He claimed the only way to prevent World War III and win the Cold War was for the U.S. to present such a strong force and military presence, Russia would not be able to take a stand against it.

Aside from describing the Soviet’s influence as being akin to that of an organized crime boss, Gen. Howley also spoke unfavorably of the Chinese Red Army, explicitly stating that even though the members’ appearance was different from the Russian forces (“slant eyes”), they weren’t to be thought of any differently, since they were also focused on spreading Communism throughout the world.

“There can be no short target for [Russia] except world control; they don’t expect it all tomorrow, but they’ve got it all planned and documented.”

For more: Watch an interview with Howley courtesy of The Film Archive.

IN DEFENSE OF TOMORROW

Abram Sachar, the founding president of Brandeis University and a faculty member in the University of Illinois history department for 24 years, returned to campus to deliver an address titled “In Defense of Tomorrow” on Feb. 2, 1951. In this speech, Sachar talked about the uncertainty Americans were facing after the end of World War II, entering into tense relations with the Soviet Union. He emphasized that no matter how big the U.S. builds its military or how carefully it vetted its civil servants for the existence of alien ideology, America’s greatest enemy is self-doubt and losing faith in ourselves. He called for Americans to not think of themselves as victims of circumstance, but rather agents of change as we continue on a quest for the best, rather than the better.

Not everyone who experienced the Communist regime first-hand believe the Soviet’s were capable of launching an attack on the United States. Robert Vogeler, an executive for the International Telephone and Telegraph Corp. (ITT), was arrested in Budapest, Hungary, in late 1949 on espionage charges. He spent the next 17 months in a Communist prison in Budapest, while the United States negotiated for his release. Here, he speaks about his ordeal, the inspiration he found while imprisoned to share his story, and the importance America must place on refusing to compromise with Communism. While he discussed that much of the world looked to America for salvation from Russia, he did not foresee a war with Russia, due mainly to Russia’s lag in technological capabilities and the amount of time and resources they were forced to spend on controlling its subjugated nations and peoples.