Lots Can Happen in a Week

Hey, everyone. This episode was recorded on November 8, 2016, which was also Election Day. 6 days prior, The Chicago Cubs won the World Series. The world shifted its axis twice in a week! We're exhausted!

Speaking of exhaustion, we dive deep into the Chicago Cubs' World Series victory. John and Brian and Lisa REALLY break down those last few innings, Lisa learns some new-to-her baseball terminology, and the gang generally reminisces about something that happened barely more than a week ago. Forgive us - Team BNDWGN is composed of two mega-fans and one bandwagon-ish fan. We can't help it. Of course, Lisa had to bring everyone down to earth a little by talking about sports and current events and the "bread and circuses" aspect of mainstream sports championships in the face of a hugely important Presidential election, but John's response to that was spot on. Enjoy.

Teams, their fans, and their home cities love them a new stadium or arena or grandstand, but at what price? Here's one of the stadiums we talked about.

John brings to the table the most meta rivalry in the history of our podcast. Here's a clue. OK, and another clue.

Lisa loved this tweet from 2014 that showed up on Twitter late in Game 7 of the World Series. 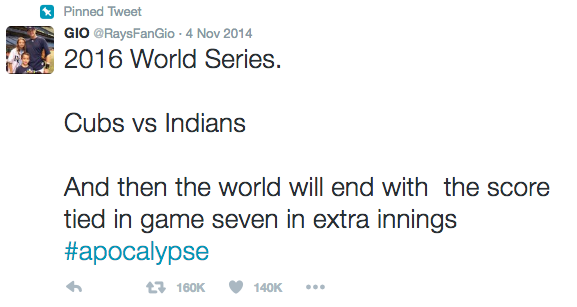 But was it for real?

John brings to light racist incidents on the University of Wisconsin campus and the resulting responses from some athletes.

Brian's choice stays in Cubs territory and tugs at the ol' heartstrings.

Until the next episode, which will come to you right before Thanksgiving, follow us @bndwgnpdcst on Twitter to get the latest, let us know what you think, etc.