What an episode! Let us not delay a single second!

First... the final wrap-up about the Summer Olympics in Rio. Remember the Summer Olympics? In Rio? 2016? Yeah. We discussed NBC's coverage and how Millennials are being blamed for poor ratings. Um... OK? This exchange on Twitter (via Reddit) was priceless: 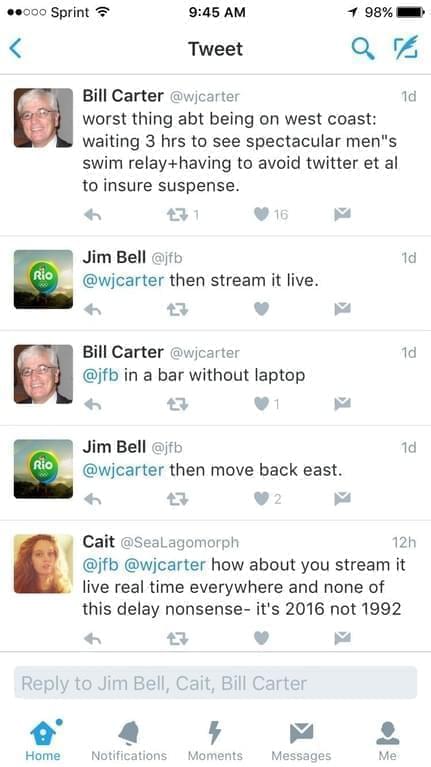 Paralympics! Have they run out of money? Whose fault is this funding crisis? Will ticket sales pick up? Will Tatyana McFadden continue to kick serious butt? Here's your answer.

John mentioned the soccer matchups for this year's Paralympic Games. Have you ever seen them play? Holy moley.

We puffy heart Illinois soccer head coach Janet Rayfield with extra glitter. She came in and talked with us about all kinds of stuff - why penalty kicks don't necessarily suck as a way to end a match, working with new athletic staff at U of I, player development in the US vs other countries, and more. Thanks, Janet! You totally rule, and we'll be out there at the next home game, yelling at the refs for you.

Bandwagon favorite Will Leitch wasn't able to join us in our musings about what Lovie Smith means to U of I athletics, he did write something very much worth reading about it.

Brian got in-depth with what he calls an "under the radar" baseball rivalry - the Detroit Tigers vs the Cleveland Indians. Speaking of baseball rivalries, Will Leitch (have we mentioned him enough for you yet?) wrote an exhaustively detailed thing about them.

We saw some great stuff on social media this week. Lisa enjoyed this video; perhaps you will, too. Brian was amused by millionaire baseball players falling down while chasing down balls. And John's heart grew three sizes when he read about the FSU football player who ate lunch with an autistic young man a few days ago.

OK! That's a wrap! We'll be back with a brand new episode in mid-September- until then, follow us @bndwgnpdcst on Twitter to get the latest, let us know what you think, etc. You can also give $$ in support of this and similar programming from Illinois Public Media - make sure you mention us when you do. THANK YOU! <3 <3