Well, hello there. Have we ever told you we're so grateful to you for paying attention to our nattering? No? Well, we are 110% filled with gratitude. Thank you!

There's this... endearing eagerness in the major league baseball offseason and during spring training, especially for fans of the Chicago Cubs and the concerned souls who love them. The vibes are good in March, because "next year" is still next year. Then the season starts and those good vibes are immediately replaced by a cheerful hardening that can only come from - years? Decades? More than a century? - of dashed hopes. Every win feels good for a few minutes. Every loss is ruminated over. The "W" flies, except when it doesn't, and these fans always blame (or credit) themselves. They lost because I went to bed early. They won because I had that amazing pesto pasta for dinner, and now we must have it every game night.

Then there's the postseason.

The Bandwagon staff boasts two major Cubs fans, and they have friends who are big fans. They're also involved with people who, as one of them put it, "lack the gene". Expectations - and stress levels - are ridiculously high this postseason, so we talked as a group about the major feelings these Cubs fans feel, and the effect those feelings have on the people closest to them. Welcome, Katy Heath and Jill Gengler! Katy is married to our own John Steinbacher, and Jill is a mega-fan married to Garrett, an erstwhile Pirates fan. It was a great conversation, and after the Cubs beat the Giants on Tuesday night, Jill tweeted this our way: 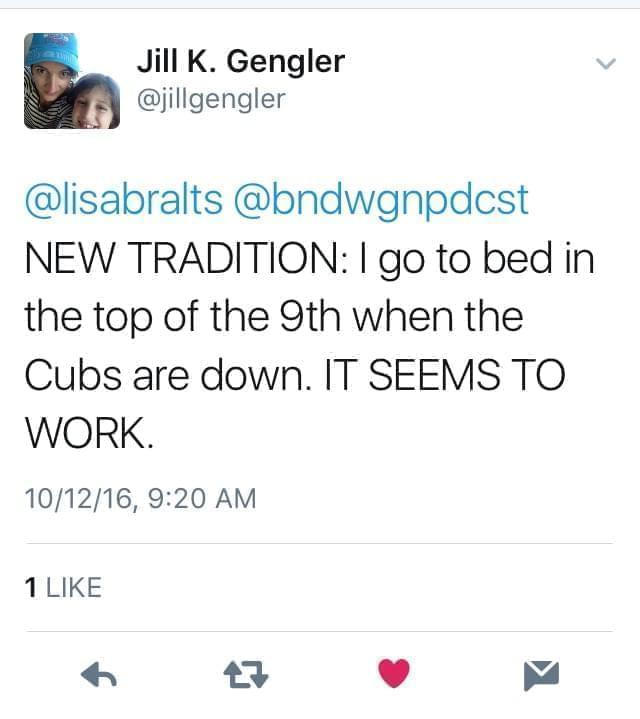 Statistics don't lie, except when they kind of do. The Cubs had a 1.7% chance of winning (or a 98.3% chance of losing) the NLDS clincher against the Giants before the top of the 9th inning.

Is this a good thing to know as a spectator? We talked about it.

It was Brian's turn to bring us a rivalry this week, and it did not disappoint, partially because it was not a rivalry between athletes or teams, but between announcers. Yep. Former Cubs announcers Harry Caray and Milo Hamilton kinda didn't get along.

On to social media:

John let us know that he found out via social media that former Illini point guard/crowd fave Dee Brown was leaving the Illini basketball staff. And Brian was wondering about a topic that had Twitter all a-twitter: the soundness of the decison by the Dodgers to start phenom Clayton Kershaw on short rest. Yay or nay? And is "Short Rest" the name of a band? Because it should be.

Lisa's contribution to the social media discussion ended up being a soliloquy about the greatness that was the show Friday Night Lights, since this fall marks the 10th anniversary of the airing of the show's pilot. Someone on Twitter was reminiscing about this terrific piece in the late, great Grantland that was published as the series was ending in 2011, it caught Lisa's eye, and that was it.

Also: No one famous liked our tweets this week.

Until the next episode, which will come to you later this month, follow us @bndwgnpdcst on Twitter to get the latest, let us know what you think, etc. We'll be back!