What happened when WILL Education and Illinois Newsroom brought high school students and teachers together with elected officials and journalists? Better election coverage for public and commercial media, engaging civics education, and inspired journalists. Illinois Public Media’s Yes! Civics summit ahead of the April 2nd municipal elections is a model we hope to replicate at other public media stations.

“It helped bring civics alive for them,” according to Sam Mills, a teacher of AP government and civics at Eisenhower High School in Decatur, IL.

Sam was one of five teachers and 30 students from Decatur, Hoopeston and Springfield to attend the March 13 all-day event. During the morning students talked with city council and school board officials from their cities in small group question-and-answer sessions facilitated by WILL reporters.

Students were surprised to learn that school board members don’t get paid. Michael, a senior from Eisenhower High School, mustered the personal courage to speak to an elected official during the summit.  “I didn’t think I would be able to talk to a city council member or school board member.”  But he did! 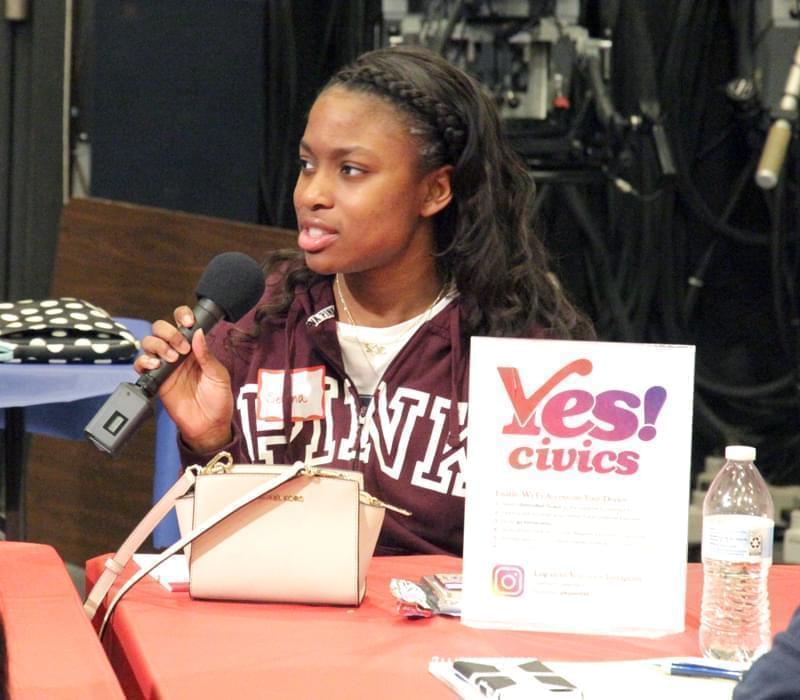 “Seeing them actually talk and interact person-to-person is always a pleasure as an educator,” said Thomas Sage, a civics and government teacher at Hoopeston Area High School.

Lee Gaines, education reporter for WILL and Illinois Newsroom, who moderated one of the panels said, “The high school students I encountered seemed extremely engaged with the inner-workings of their schools and eager to talk about the issues facing their districts with the elected officials in the room.”

Journalists from WILL radio, the Hoopeston Chronicle and the Commercial News spoke about their craft and the challenges of being reporters in the age of social media. They took questions from the students.

“I learned a lot more about journalism,” said Sydney, a junior from Hoopeston. “That’s something I would like to go into.”

After learning about the responsibilities of journalists and of school board and city council members, WILL staff helped the students comprise questions for the candidates running for these positions in their districts.  Here is a sample of some of the questions they came up with:

Is there a problem with racial discrimination in [school] discipline?
How will you make yourself accessible to students?
What should we do right now to prevent a mass shooting at our school?
How can we bring new entry-level and semi-skilled positions back?

WILL sent their questions to the office holders and posted their answers on our website.  Participating newspapers from commercial media shared the responses on their websites, too.

Larry Smith, editor of the Commercial News in Danville, appreciated the work of the students and how it helped his work. “It allowed us to reach beyond our usual efforts to get better and more extensive answers from candidates running for local office,” he said. “My biggest take-away is that people are interested in more in-depth coverage of local elections. I think we sometimes take for granted that the information is out there on candidates for whoever wants to take the time to find it. That’s not always the case.  Local residents pay more attention if we can consolidate the information for them in an easy to find format.”

Several students were of voting age. “It made me prepared to go out and vote,” said Jose from Decatur. Regarding the questions sent to the candidates, Tara from Springfield said she was “excited to get answers back.  I am 18 and I will vote!”

Students from all three schools mentioned that they enjoyed meeting students from other regions of the state.  According to Jose, “We see a lot of the same concerns throughout and it is kind of comforting to see other students in other places with similar concerns and asking the same questions about how to make our communities better.”