A love of life—even snakes [from the archive]

Thanks to a friend who’s more observant than me, I recently discovered a new species of reptile in my own backyard, a plains garter snake. Maybe I should clarify by saying I mean the plains garter snake was “new” to me, not new to science or the wider world.

I should also add that it’s not the case I had never seen a plains garter snake before, or even picked one up--just that I had never recognized one as something other than a common garter snake, which is the kind of garter snake I was familiar with where I grew up in suburban Cincinnati, Ohio. 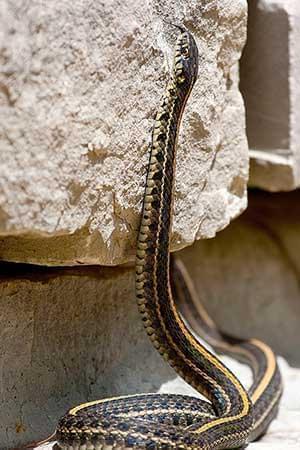 Most people wouldn’t notice the difference between a plains garter snake and a common garter snake at first glance, but with a decent photograph, the field marks that distinguish them are easy enough to pick out. The plains garter usually has wider black bars on the margins of the scales around its mouth, and the yellowish stripe down the middle of its back has a tinge of orange. An even more certain difference between them is the position of a light-colored stripe on the side, which is exactly one row of scales higher up on a plains garter.

Understanding that I had not properly identified the snakes in my backyard at home prompted me to look back at photos I’ve taken of the garter snakes that inhabit my other backyard, the landscaping along the Boneyard Creek on the U of I campus.

As for the other animals with which they share habitat, there’s not much difference between plains and common garters either. Like all other snakes, both are carnivores and eat just about any creature they can catch and swallow. Depending on their size and where they live this may include earthworms, slugs and other invertebrates, as well as small amphibians, birds or fish. Both also serve as a source of food for the same variety of predators—birds of prey, midsize mammals and other snakes.

My interest in knowing the difference between various species of garter snakes is rooted partly in my habit of  “collecting” animals and plants by photographing them; being able to identify more species means being able to collect more.

Of course this raises the question of why I collect plants and animals in the first place. The un-fancy answer to that is “because.” To me, there’s nothing more interesting.

The fancier way to characterize this impulse would be to call it an expression of “biophilia,” defined by the great scientist and naturalist E. O. Wilson as “the innate tendency to focus on life and lifelike processes.” For Wilson and others who have pursued the implications of the “biophilia hypothesis,” our “love of life” (biophilia translated literally) is key to our survival as a species and our healthy development as individuals.

Does your love of life extend to snakes? When I told my spouse about the topic of this commentary, she suggested I also include tips for creating snake habitat in your yard. Maybe I’ll come back to that in the future, but for now let me just emphasize there’s no reason to fear—or  harm—any of the snakes commonly found in central Illinois. They pose no threat to people and often do us good by helping to control rodent populations.