It’s summer at last and for many people that includes the promise of traveling beyond east central Illinois to enjoy the outdoors. (Rocky Mountains here we come!) But let’s face it, vacations are not a full-time lifestyle option for most of us, and we’ll spend the majority of days this season doing what we usually do: going to work in the morning and heading home in the evening. So here’s a plug for enjoying the wildlife we can experience every day.

I typically commute from my home just west of downtown Champaign to the U of I campus by bike, via a route that takes me past the Second Street Basin. In combination with Scott Park, the basin provides a little oasis for people, and habitat for a surprising diversity of animals.

As I’ve mentioned in the past, it’s a great place for seeing turtles. The large, spiny softshell turtle that first appeared there last year can be seen again now, basking on a partially submerged boulder or somewhere near the shoreline. She’s the biggest turtle present and the only one with a weirdly tapered snout that ends in a tip like an elephant’s trunk. Near her, you can often see other turtles, too, including a large painted turtle whose head and neck are nearly black, as well as red-eared sliders in an assortment of smaller sizes. 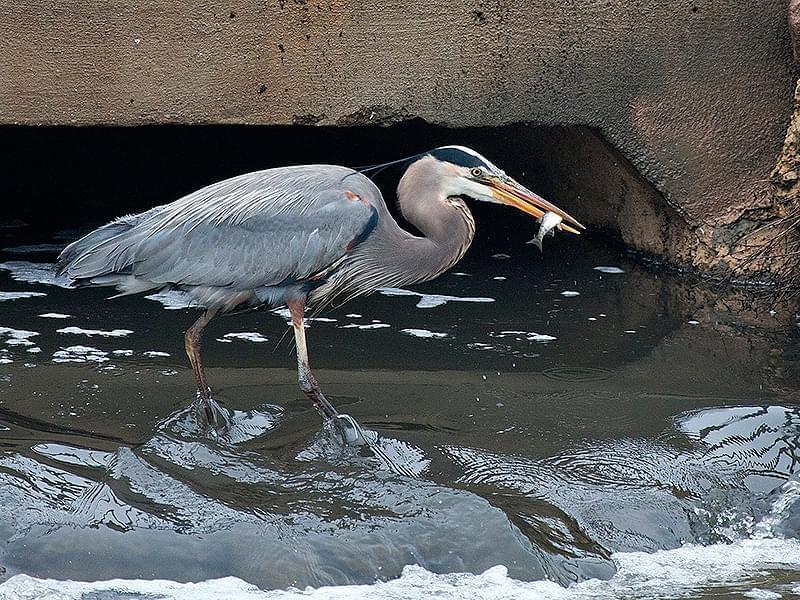 The Second Street Basin also supports a good number of fish, although I know about them only from observing the birds that eat them. The most conspicuous of these is a great blue heron, which catches its breakfast on the west side of the basin where water flows into it. The heron stands knee deep in the current and uses its long, strong bill to snap up unlucky shiners, minnows and sunfish.

A less conspicuous but equally beautiful green heron also stalks the shores of the Second Street Basin on a regular basis. It’s a crow-sized bird with orange-yellow legs, a dark green back and red-brown neck and shoulders.

As if the herons weren’t enough, the fish of the basin are also food for a belted kingfisher, which perches on the railing of the overlook and then plunges into the water to capture prey.

I must admit that while my descriptions of wildlife at the Second Street Basin are accurate they represent a tightly focused view of the scene.

I was reminded of this recently when Lisa Bralts of Illinois Public Media joined me there for a brief tour one morning. Suddenly I was self-conscious about things I normally look right past, especially all of the goose poop on the sidewalks and the sad state of the landscaping (no complaint there; I know it’s a work in progress).

Worse still, Bralts had come to gather material for a segment on urban wildlife for her multiplatform program, “Backyard Industry,” and I felt like it was important that we see something cool. But it was too early for the turtles to be out yet. And the fish-eating birds were all elsewhere.

We got as far as the bridge over the Boneyard Creek in Scott Park before an unlikely appearance by a creature I hadn’t anticipated seeing saved the day. Rather than providing my own account of that, though, let me direct you to hers. You can find it on the Illinois Public Media website at http://will.illinois.edu/backyardindustry/program/urbana-bestiary.