The bird reports are rolling in. Must be spring.
Rob Kanter
Listen
Download

One way you can tell spring has arrived is to listen to the conviction with which cardinals are now singing, including this one, which I stopped to record while I was out for a run last week. Another is to hear the reports friends bring me about what they’ve been observing.

A friend I’ll call “Anna” recently stopped by my office to talk about what she had seen with her son, a second-grader, on their walk to Bottenfield School in Champaign. She said, “There was a huge, dark bird with two-toned wings and a wingspan like this [arms wide] soaring overhead. Would that be a turkey vulture?”

It would. And many other people I’ve talked with recently have noticed them soaring over town. Turkey vulture populations in North America have increased substantially in recent decades, and in Illinois some of them don’t go very far south in winter anymore, thanks to the increasing availability of roadkill, as well as the food they can scrounge at landfills.

Another friend I’ll call “Lisa” texted to say she had seen and heard a large flock of large birds flying over Urbana at night. “I’ve never heard this kind of call before,” she said, “but they flew in a V.”

This would have been one of the large flocks of geese that are not Canada geese that have been moving north since mid-February: snow geese or greater white-fronted geese. By listening to both calls on the Web, Lisa determined that hers had been white-fronts. Here’s what that sounds like.

Back on February 18, my friend “Eric” asked whether I had seen my first red-winged blackbird of the year yet.  (Unlike robins, which now remain in central Illinois through the winter, red-winged blackbirds are generally absent in here for some part of winter.) I had not, but we both agreed (in the way mature people sometimes do) that it “seemed about time” for some to show up.

That very evening, my spouse called my attention to a facebook post by our mutual friend, “Lucy.” She wrote, “I saw my FOY [birder-speak for “First of Year”] red-winged blackbird this morning. My favorite harbinger of spring. Turns out it is the same day I saw him last year and a day earlier than two years ago.”

It was with more mixed feelings that our friend “Sue” reported last week the return to her yard of a very different pair of birds, the Cooper’s hawks that began nesting there two years ago. Sue prefers to have songbirds around, but since songbirds are on the menu for Cooper’s hawks, they’re scarce in her yard during the hawk breeding season. 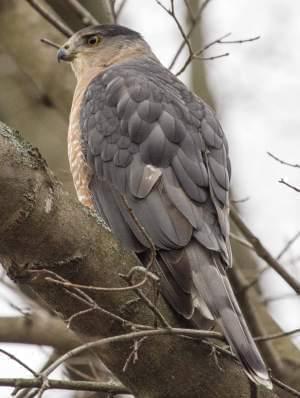 The end of February also saw the return of American woodcocks to central Illinois, as reported by my friend “Roger” on the Birdnotes listserv. He walks with his spouse at Meadowbrook Park in Urbana early on most mornings, and they’re among the first people to notice such things.

If you’re interested to get out looking birds and other wildlife, there are some really nice opportunities to do so locally with company in March, including the Sunday morning walks at Busey Woods and Crystal Lake Park in Urbana, which are led by members of the Champaign County Audubon Society.