A look at courtship among some nonhuman creatures in anticipation of Valentine's day
Listen (Duration: 3:55)
Download

Whether or not you planned well for it, Valentine’s Day is here. I won’t comment on the human behavior associated with this holiday, but I can provide a bit of diversion and give suggestions about where to see animal courtship spectacles in Illinois.

Consider, suggests May Berenbaum, who is head of the UI Department of Entomology, the bizarre (to us) behavior of some pyralid moth males. In the process of courtship they beat females over the head with the tip of their abdomen. This behavior may look like abuse to us, but in reality its purpose is to transfer aphrodisiacs. Or think of how good your gift ideas look when compared to the offerings certain male insects present to their prospective mates: hangingflies, for example, which proffer dead flies, or certain empid fly males, which court females with empty balls of saliva.

Makes a box of chocolate look pretty special after all, doesn’t it? 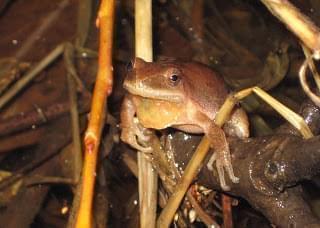 Chris Phillips, who is a herpetologist with the Illinois Natural History Survey, points out that in the world of amphibians it’s not unusual for courtship to involve a communal aspect, because mating requires frogs, toads, salamanders and others to come together at bodies of water. (Forget cozy dinners for two at candlelit restaurants!) That’s where their eggs will be laid so their young, which must live in water, can develop before going off to breathe air live on land and as adults.

Barring unusual weather, the rains that fall in late February and early March will get Illinois amphibians moving. Male spring peepers and wood frogs will vie for mates by singing (or calling if you prefer, beauty being in the ear of the beholder) in a chorus that can be uncomfortably loud for human observers.

A male wood frog that lands a mate grasps her in an embrace called “amplexus,” which may look much like a human hug. But he is apt to hang on for hours, or even days, his grip secured by rough pads that develop on his thumbs during the breeding season just for that purpose.

If you’re more interested in birds, UI avian ecologist Mike Ward calls attention to two courtship spectacles that can be witnessed in Illinois.

One is the performance of male greater prairie chickens in the lek, a daily gathering during the breeding season where they compete for the attention of females. Males spar with each other to occupy the best positions in the field, and then put on a highly choreographed performance that puts the funky chicken to shame.

Prairie chickens hang on in only a couple of very small isolated populations in Illinois, within the confines of the Prairie Ridge State Natural Area southeast of Effingham. If you want to witness their courtship it’s best to make arrangements through the office there.

It’s much easier to catch the hardly-less-impressive courtship of American woodcocks, which takes place throughout the state, including a number of sites in Champaign and Vermilion counties. Beginning sometime in March, at dawn and dusk male woodcocks put on a display that culminates in the “sky dance,” famously described by Aldo Leopold in “A Sand County Almanac.”