Highlights from a Christmas Bird Count

If you’re out before sunrise for the purpose of birding at this time of year, you’re “owling.” That is, you’re quietly listening for owls to call, and perhaps playing a recording to prompt them. And owling is the way I started the Champaign County edition of the 2017 Christmas Bird Count last Saturday, in company with three more youthful members of the Champaign County Audubon society: Brody Dunn, Jeff Peyton, and Rachel Vinsel.

We were hoping to hear eastern screech owl, or maybe even a northern saw-whet owl, which a friend had heard a few nights before, but neither of those turned out. Fortunately, a pair of great horned owls began a soft duet just as day broke.

From our owling spot near Meadowbrook Park in Urbana, we zipped over to the pond southwest of First and Windsor in Champaign to get a tally on the waterfowl there before they started dispersing for the day to feed. Canada geese and mallards dominated the scene there; we estimated somewhere around a thousand of each.

You might think it would be easy to count ducks and geese on a pond, but it can actually be pretty tricky. Some of them are always in motion, and the view of individuals farther away is obscured by ones that are nearer. On top of that, it’s easy to miss large numbers of ducks tucked in along shorelines.

Over the course of nearly an hour observing the pond, the four of us found only two additional species of birds there, a single hooded merganser and a flock of four green-winged teal.

As we drove away, I had an inspiration, which was to turn into a gravel drive through a cow pasture and announce, “This would be a great place to find a northern harrier.” Harriers are among my favorite birds of prey and far less common than the raptors most often seen locally, which are red-tailed hawks. But a minute later, we had one, a beautiful adult male, uniform gray above and snowy white below, swooping across the field in the bright morning sun.

How did I know he would be there? I didn’t. But the habitat was right and I’d seen one there in years past, and we all had a laugh enjoying the success of my prediction. I wonder if the others remember how many more times that day I made similar projections that produced no such results. 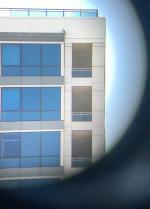 w. It was nowhere to be seen as we parked the car and went into a restaurant on Green Street for lunch. But as we stepped back out onto the sidewalk, it was just visible with the naked eye, a dark little bump on a ledge near the top of an apartment tower at Fourth and Green. Fortunately, Rachel had tucked binoculars into the bag she was carrying so we could all get a better look.

As on most bird counts, we had a few unanticipated hits, most notable among them a pileated woodpecker we found across the road from Meadowbrook Park. Of course, we also had our share of misses. The worst among these, I’m ashamed to say, was American robin. How we failed to observe any I’m still not sure, but the following day I saw more than 100 in our count area, on a lawn near some ornamental crabapple trees, right where you’d expect them.