Invitation to opening for a photography show

I’m going to start today where I would normally end, by plugging an event. On Saturday, February 1st, you are invited to the Anita Purves Nature in Urbana for the opening of an exhibit titled, “Life and Land,” featuring photography by two locals, yours truly and Brad Hudson, who I know in his role as a teacher of photography at the U of I. In broad terms, the “life” part of the exhibit will be prints of digital photos by me of birds and other local creatures, and the “land” part will be prints produced through traditional gelatin-silver processes by Brad.

As someone who’s really at home among visual artists, Brad politely declined my invitation for advance commentary on our show. But as someone for whom writing and photography generally work together, I like the idea of talking about taking pictures.

In the pre-digital age, I had always enjoyed taking family and travel photos and I did plenty of that with early point-and-shoot digital cameras as well. But with the constrained budget of a young family, I wasn’t able to justify the gear needed to shoot wildlife until my commentaries began to run in the News-Gazette, since it was just natural to have photos run with them. Since then, shooting wildlife with cameras has made me a better observer and appreciator of the natural world, and enriched my life immeasurably. 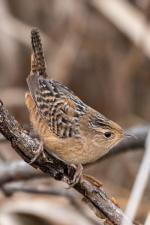 Occasionally, photography provides important documentation for birding observations. For example, on the recent Christmas Bird Count at Clinton Lake, my friends Rachel Vinsel and Brody Dunn discovered a secretive bird that’s very rare in central Illinois during winter, a sedge wren. Although it was bouncing around in heavy brush, we all three got good looks at it and had no doubt about what it was. But according the records, a sedge wren has been observed on that count only one time before, and that was more than 20 years ago. Given the subjectivity inherent in such field observations, it was a nice bonus to bring home photographs of the one we saw.

Photography has also enabled me to share with people the beauty of other birds that live among us, or at least pass through central Illinois a couple of times a year. For example, few people know the American redstart by name but it’s one of the more common warblers seen here during migration. They are literally all over town in early May.

But redstarts are small and they move quickly, and like many other warblers they spend most of their time high enough in mature trees that people don’t notice them. I hope viewers enjoy seeing my photograph of one, because that’s good in and of itself. But with that photograph, I hope also to inspire viewers to be more attentive to the possibility of seeing an American redstart later this spring.

Looking at wildlife as a photographer has helped me see better what’s interesting about some of the creatures we see every day, too—even those we sometimes want to see less of. American crows, for example, can be really obnoxious neighbors in winter at their massive communal roosts in town. But the impression you get of them when they’re together in a noisy mass at night is very different than the one you get from an individual that allows you to approach closely and looks you in the eye as you take its picture.

Having said this much, maybe it’s time I let you decide to see whether the photos in the “Life and Land” exhibit speak for themselves. I hope to see you there.