With the vacation season behind us, it's time to focus on the everyday environment
Rob Kanter
Listen
Download

Even though there’s time on the calendar before Autumn begins officially, we’ve passed some important marks on the cultural calendar. Labor Day is a memory, the new school year is in full swing, and the season of traveling to outdoor destinations is over. For me, that means it’s a great time to renew appreciation for the undramatic nature that surrounds us every day.

Birds are on the move. The peregrine falcon that has spent the past four winters on the U of I campus arrived ahead of the students this year. If you’re on campus, you can sometimes spot him perched high on side of the tall buildings near Fourth Street.

Ruby-throated hummingbirds are migrating, too, and you can attract them to your own backyard by hanging out a nectar feeder. Some hummingbirds linger into late October, and fall occasionally offers the opportunity to see species that don’t typically inhabit the Midwest.

Birders who really want to take advantage of the season can come out to Meadowbrook Park  in Urbana for Sunday morning bird walks led by members of the Champaign County Audubon Society. These walks, which continue through October, depart from the Race Street parking lot at 7:30. Birders of all skill levels are welcome.

At our latitude, the peak abundance of migrating monarch butterflies typically occurs during the second or third week of September, so keep an eye out for them. When you catch sight of one, call to mind this mystery. The monarchs we see heading south in the fall are generations removed from the ones that started north from Mexico in the spring. Yet they’ll somehow navigate to the very same stands of mountain forest where their great great great grandparents overwintered last year. And we think GPS is cool.

Humbler insects also abound now. It’s astonishing to me to think about how many crickets must inhabit the yards in just my own neighborhood. My dog snaps at every one we encounter on the sidewalk, which means our walks take longer as their population booms late in the summer. 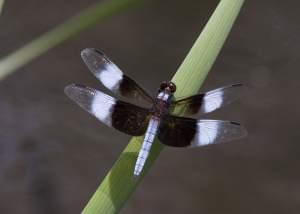 Over the prairie at Meadowbrook Park and other natural grasslands, hordes of dragonflies rule the air. But you can also see dragonflies near the margins of just about any pond or creek, even the Boneyard where it flows through town and campus. Learn to identify the male widow skimmer, with his powdery blue body and distinctively marked wings and you may find you’re interested in identifying some of the other dragonflies you see, too.

If you’re near the Boneyard Creek, or any other creek, pluck a berry from a nearby bush and toss it into a deep spot. You might be surprised by the number of fish that bolt out to investigate. Even the derided Boneyard now hosts more than 20 species of fish, thanks to the Clean Water Act.

Late in the day Cicada song still fills the air. Most of this year’s adults have already come and gone, but now and again you can still find one just emerging from the exoskeleton that it wore while living underground. If you’re so lucky, make time to watch the process.

As evening gives way to night and cicadas rest from their singing, bats take wing to feast on the insects that fill the air. You can see the first act of that nightly drama by sitting quietly and training your gaze on a single patch of evening sky.