The real story about bats these days isn't how amazing they are, but how they're declining because of a deadly fungal infection
Rob Kanter
Listen (Duration: 4:00)
Download

As a writer who loves wildlife, I find no story more difficult to tell than the story of how white-nose syndrome is affecting bats in North America. Before white-nose syndrome arrived, which was only a decade ago, I enjoyed explaining why bats are so amazing in hopes that listeners would come to love, or at least appreciate them. Today, I can only present the grim news of white-nose syndrome’s progress. 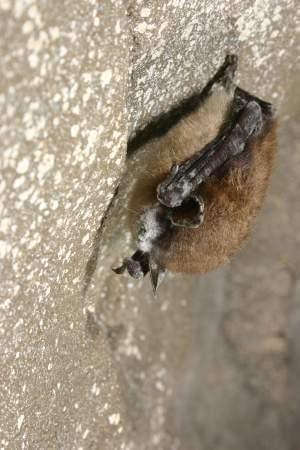 White-nose syndrome is a fungal infection that attacks the skin of bats, and that’s named for its fuzzy, white appearance. It spreads directly from one bat to snoyrth, and also via spores that survive in soil and on other surfaces. Because of these traits, and the fact that it thrives in cool, moist conditions, white-nose syndrome is especially

hard on bats that hibernate on the ceilings of abandoned mines and caves in tightly packed colonies. The fungus that causes white-nose syndrome can cause extensive tissue damage in bats, but often it kills them indirectly. It agitates them so much they come out of hibernation and become active during the winter, whichdepletes their fat stores at a time no food is available to replenish them.

The fungus that causes white-nose syndrome apparently arrived in New York in the fall of 2006, and is thought to have been transported th

ere from Europe by way of spores on the boots or other equipment of cavers. Since it was identified in caves there the following spring, it has spread rapidly in a wave radiating outward in all directions.

It’s impossible to know exactly how many bats have been killed by white-nose syndrome, but estimates of the toll are staggering, most likely between six and seven million. In the eastern US it has sometimes killed every single bat in an affected colony.

Scientists have been hard at work investigating how white-nose syndrome works in the interest of helping conserve bats, but it’s difficult to find much hope in what they’ve discovered so far. One study at Illinois, for example, confirmed the depressing fact that the spores of white-nose syndrome can persist in the environment even when there are no bats around. Other studies have identified agents that kill the fungus or inhibit its growth. But there is a wide, wide gulf between identifying such agents and deploying them effectively to treat large numbers of animals in the wild. 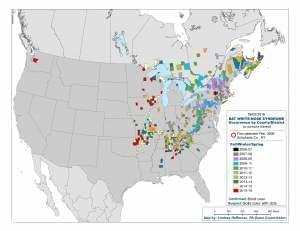 Ultimately, I think, the devastation caused by white-nose syndrome should bring us around to the question of what we value as humans. I suspect most people who enjoy the benefits of speedy international travel and trade—including myself—would not be willing to give those things up in order to stop the spread of invasive species. But that doesn’t mean our only option is to do nothing, does it? I’ll keep you posted as I follow up on this question in the weeks to come.