If you’ve visited local natural areas recently, you may have come across patches of land blackened by fire.
Rob Kanter
Listen
Download

If you’ve taken advantage of the recent weather to visit local natural areas, you’ve probably come across patches of land blackened by fire. These are places where you expect to see tallgrass prairie, but where, for the moment, there’s nothing to block your view of a robin on the ground 50 yards away.

What you’ve encountered is evidence of land managers using the most powerful tool at their disposal, fire. I’ve hear people wonder aloud whether it’s necessary to do all of this burning, whether it wouldn’t be better to just leave nature alone.

The short answer to that question is, no—not if our aim is to preserve or reconstruct landscapes that resemble tallgrass prairie as it existed in central Illinois at the time of European colonization. 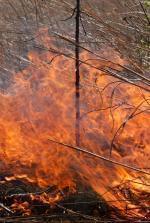 That’s because without fire, prairie would have given way to forest here over the past 5,000 years. Prairie fires, which were set regularly by American Indians, and sometimes caused by lightning, are estimated to have scoured any given bit of land here once every one to five years.

That’s because without fire, prairie would have given way to forest here over the past 5,000 years. Prairie fires, which were set regularly by

American Indians, and sometimes caused by lightning, are estimated to have scoured any given bit of land here once every one to five years.

Prairie fires usually moved quickly, so their heat did not penetrate deep into the soil. Thus they killed the saplings of encroaching trees—such as walnut, ash and sugar maple—and favored instead the growth of herbaceous perennials, grasses and flowers that die back and store their energy below ground in winter.

By removing thatch and speeding the return of nutrients to the soil in the form of ash, prairie fires enabled dormant seeds to germinate, and the spring and summer that followed on were marked by a profusion of flowers and reinvigorated forage.

Similar effects are now achieved through the use of prescribed burns.

In addition to thwarting the advance of local trees, prescribed burns also now perform the important service of knocking back invasive plants imported from other continents, chief among them bush honeysuckle and autumn olive. Without fire as a tool, says Mike Davis, who’s a natural areas technician with the Urbana Park District, the task of keeping such plants in check would be far more difficult than it already is. 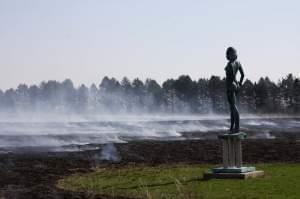 Most prescribed burns operate like the one I participated in recently at Meadowbrook Park in Urbana. It was organized by Davis, and carried out with help from other park district personnel, as well as volunteers from Grand Prairie Friends and the East Central Illinois Master Naturalist Program.

Some volunteers manned barricades to keep park users from wandering into the designated areas. The rest divided into two burn crews. Working on opposite sides of the burn unit, and beginning at the downwind end of it, one person from each crew used a kerosene drip torch to light fire along the mowed paths that served as breaks. Others who were armed with backpack sprayers, flappers and heavy rakes then spread out along the lines to make sure no fire crossed them.

By design, the fires we lit on the sides of the burn unit moved slowly, since we were advancing into the wind. Not so the headfire we created as the two burn crews converged along the upwind edge of the unit. It snapped and crackled briefly, then roared to life and swept back across the field, exactly according to plan.

If you have the opportunity, keep an eye on the blackened patches at Meadowbrook Park and other preserves as spring progresses, and enjoy the tallgrass prairie plant show made possible by fire.