Ready for a new year of birding

A last look at birds for 2016, and a quick look ahead
Rob Kanter

As the sun set on the last day of 2016, I was doing one of the things I like to do best: birding with friends. The friends—Brody Dunn and Greg Lambeth—and I had spent the day participating in the Audubon Christmas Bird Count at Clinton Lake, where Greg and I, with company from various others, have covered the same territory for more than a decade.

Our stop at sunset was the extensive marsh behind the dam, where we were most interested to see the birds of prey that favor such places. During daylight hours, that’s northern harriers. Harriers are long-winged, long-tailed predators that weave back and forth across open country in a low, up and down, start and stop sort of flight as they hunt for small mammals and birds. As the sun sets, harriers land in the grass to roost overnight.

At about the same time harriers are settling down, their nocturnal counterparts, short-eared owls, can sometimes be seen flying up from the ground to begin the night shift, hunting for the same sorts of prey in a very similar fashion. Alas, no short-eared owls showed up for us on New Year’s Eve, although we stayed watching until dark--just in case. All the same, we had already enjoyed a fine day of birding.

We saw more bald eagles than I’ve ever seen in a single day of central Illinois birding, ten to twelve in all. It’s difficult to say precisely, since soaring eagles travel long distances surprisingly quickly. Waterfowl were also plentiful. We saw hundreds of common mergansers and hundreds more common goldeneyes, as well as many other species of ducks and enormous numbers of geese. We made a clean sweep on woodpeckers, including downy, hairy, red-headed, red-bellied, and pileated, and on top of that we saw three yellow-bellied sapsuckers, too.

Most days in the field have their own quirks, and this one didn’t disappoint. We were surprised to find not one but two Virginia opossums abroad in daylight, both of them spotted by Brody, and both of which I chased down to get photographs. 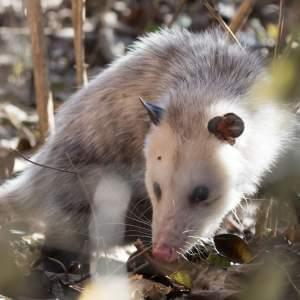 What’s stranger than seeing opossums out during the day? Seeing turtles active on December 31. But late in the afternoon we came upon three softshell turtles basking on the bank of the flume where warm water is discharged from the power plant.

If this commentary has you wondering about getting out yourself, rest assured there are plenty of opportunities for that in central Illinois. On January 28 and 29, the Illinois Audubon Society will host its annual Bald Eagle Watch Weekend at Starved Rock State Park. While the eagles that congregate at the lock and dam on the Illinois River there are the main attraction, a wide range of other free activities will take place as well (many of them suitable for families with young children and most of them indoors).

Next month, the Champaign County Forest Preserve District will conduct “Owls Prowls” at Lake of the Woods on the evenings of February 10 and 17. If you’re itching to get out sooner, you could get started in a contest taking place at the U of I’s Allerton Park near Monticello throughout 2017, the Allerton Birding Big Year. Organized by natural areas manager, Nate Beccue, this informal competition invites participants to enter their sightings from the park on the web, and it offers a variety of prizes. Of course, as Beccue points out, “the real prize is observing the diversity of birds in their natural habitat.”

I’ve already registered, and I plan to return to this topic when spring migration heats up. In the meantime, I hope to see you out there!