This week Environmental Almanac continues its series featuring students from the School of Earth, Society, and Environment who are developing their skills to communicate about environmental topics.

Jess: Hear that? It’s the sound of combs being used as musical instruments. At the Sudden Sound Concert, presented by the Global Arts Performance Initiative and funded by the U of I Student Sustainability Committee, Tom Nunn and Paul Winstanley performed an hourlong, uninterrupted concert, using instruments made from found materials--balloons, combs, scrap metal and so on. 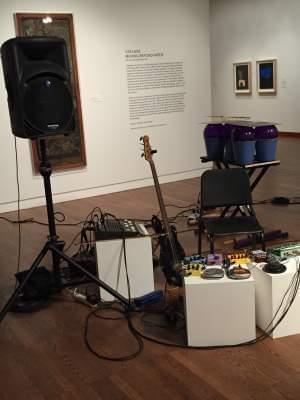 Music for Hard Times, Nunn and Winstanley’s performance, is just one in a string of environmentally-focused events that will culminate with the Sonified Sustainability Festival on April 16th. Jason Finkelman, Director of the Global Arts Performance Initiative and the mind behind Sonified, hopes these performances will engage the public in an appreciation of and dialogue about “ecological music and arts through performance.”

Gilleece: The use of the word “sonified” in the title of the concert series conveys the purpose of the festival well. “Sonification” is defined as "the communication of information through non-verbal audio." This describes how recycled instruments have been the focus of the series, but also how this festival is a way to convey the message of sustainability through unconventional means. Tom Nunn and Paul Winstanley embody this ideal of sonification--unconventional and interpretive.

Nunn and Winstanley have been working together since 2010. Their duo specializes in producing organic-sounding music that they improvise on homemade instruments. Nunn’s niche is creating instruments out of recycled materials, which he has been doing since 1976. While he emphasized that he was not initially motivated by the the idea of sustainability, Nunn had ideas about how his art, and others like his, played into the ideals that sustainability represents: “You’re already winning, you know, starting with the idea of recycling. So whatever comes out of that just adds to that.”

Michelle: There will be two more events for the Sonified Sustainability Festival, the first being a gallery show by  Ken Butler, a Brooklyn-based artist whose sculptural “hybrid instruments” are manufactured with recycled and repurposed materials. This exhibition, titled “Hybrid Visions” will open to the public on Thursday, April 14th, 2016 at 4:30 p.m in the Illini Union Gallery. It will feature his musical instrument sculptures and will express how re-invention and hyper-utility have hidden meaning and associations that can momentarily create a striking and re-animated cultural identity for common objects.

The festival will then culminate at the start of Earth Week at the Krannert Center for the Performing Arts on Saturday, April 16th. This all-ages event with free admission will feature live music by Ken Butler using his recycled instruments. Local musicians and interactive art making focused on sustainable practices in the arts and an accompanying information fair will provide visibility of local sustainable projects, programs, and organizations all working towards a greener future.

Tune in next week to hear about an effort that encourages people to "Skip the Bag."