What I did on my summer vacation

Wildlife highlights from a trip to Colorado

Never in many years of fishing have I heard a better report than this, which came from an enthusiastic young man at the counter of St. Peter’s Fly shop in Fort Collins, Colorado: “Everybody’s catching fish everywhere,” he said.

“Everywhere,” in this case, meant the 40-some miles of the Cache la Poudre River above Ft. Collins. And within 24 hours, “everyone” included me. I caught brown trout, rainbow trout and brook trout all within walking distance of our campsite, and I fished only in the time between dinner and sunset. Don’t worry, though—this isn’t a commentary about fishing. It’s about the wildlife highlights of a camping trip my wife, Karen, and I took in July.

Most of our time in the Poudre Canyon was spent hiking with a good friend from graduate school who’s now a faculty member at Colorado State University. And the most interesting stream creature we encountered was not a fish at all, but an American dipper, North America’s only truly aquatic songbird. 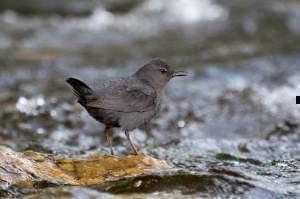 r, since it looks much like an American robin without the orange-red breast. But it’s difficult to imagine a dipper in action until you’ve seen it. One moment, it’s perched on a rock in the middle of a swift mountain, stream and the next it dives into the torrent headfirst, disappearing from sight. Surely it will be carried away, was my thought upon seeing this for the first time. Not so, though--up it pops moments later with a prize gleaned from the streambed.

Dippers eat aquatic insects and just about any other kind of small creature found in the streams where they live, including worms, small fish, and fish eggs. Dippers nest near streams, too, either on natural structures, such as cliffs, or up under bridges. Once we understood their affinity for bridges, we made a point of pausing at each one to see whether there were dippers using it, and often there were.

Our most dramatic encounter with wildlife took place in Rocky Mountain National Park. On a day-hike up to an alpine lake there, our trail ascended through excellent elk habitat, and before long we heard from hikers who were on their way down that, indeed, a herd of cows and calves lay ahead.

We may be flatlanders, but we had to laugh when one man assured us we needn’t be concerned about them, saying, “It’s only moms and babies.” Elk cows protect their young fiercely, and, weighing in at 500 pounds, they are formidable mothers. 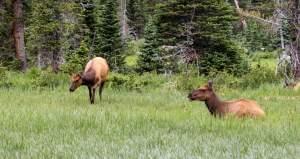 As bad luck would have it, we passed one of the babies grazing in a thicket without seeing it, and so came between it and its mother, who was with the rest of the herd, a little farther up the trail. Baby squealed. Mama raised her head in alarm, fixed her eyes on us and gave a series of sharp barks. We scrambled twenty feet up the steep, smooth rock face on our left—our only real option, since the thick growth of trees on our right formed an impassable barrier.

I hope your summer included some time outside, whether it was far afield or here in Illinois. I’ve got a report on environmental developments from the home front in store for next week.