A new sighting and a turtle tale revisited

This week I received an email from Elizabeth Sternhagen, an observant local resident who spotted an uncommon turtle at Crystal Lake Park in Urbana. She wondered if it might be the very same uncommon turtle I wrote about here back 2013. Now I and my friends mentioned here are wondering too.

Why did the turtle cross the road? Good question.

But the one that headed north across University Avenue in Urbana during afternoon rush hour recently was fortunate that Sandy Mason noticed it when she did, then parked her car and ran back to grab it before it could be squished by a less observant driver.

Mason, an educator with U of I Extension who is known to many for her expertise in horticulture, is also an accomplished naturalist. Her first impulse was to carry the turtle across the road in the direction it was headed, which is standard practice for moving turtles found on roads.

But she hesitated since that would’ve just put the turtle in a parking lot—not really a good spot either. Beyond that, she was puzzled about its identity.

She knew from a glance it wasn’t a snapping turtle. And she was fairly sure it wasn’t any of the other turtles commonly seen in east central Illinois. Its top shell, or carapace, seemed too dome-like for a painted turtle or a slider. But it was a dull, dark green in color, and had none of the markings that characterize box turtles. Hmmmm. 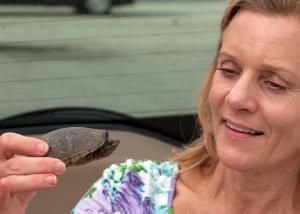 Because work commitments would prevent her from following up over the next couple of days, Mason contemplated releasing the turtle at nearby Crystal Lake Park without resolving the question of its identity. But what if she really had found something unusual? So she called me to ask if I could help figure out what it was, and convey it to our mutual friend Chris Phillips if it turned about to be a rarity. Phillips is a herpetologist with the Illinois Natural History Survey, a division of the U of I Prairie Research Institute, and curator of the amphibian and reptiles collections for the state and the university.

A consultation with the “Field Guide to Amphibians and Reptiles of Illinois” showed that the beneficiary of Mason’s efforts was a common musk turtle, a species that is, as the name implies, widely distributed. (Its range includes all of the eastern U.S.) But despite that, the “Field Guide” showed, no specimen of common musk turtle had ever been collected in Champaign County--so this one was noteworthy. It spent the night in a cardboard box in my garage, and Phillips picked it up the next morning. He photographed it, drew blood for future DNA analysis, and then let it go at Crystal Lake Park.

Chances are slim that anyone will ever again notice the common musk turtle that Sandy Mason rescued. It’s less than five inches long, and it will seldom leave the water.

But Crystal Lake Park and other water bodies do offer good opportunities to observe more common turtles as they bask at this time of year. On sunny days look for painted turtles and red-eared sliders on logs and rocks at the water’s edge.

My favorite spot for turtle watching locally is the Second Street Detention Basin in Champaign, where sliders of all sizes hang out. In addition, this summer they have been joined by a very large spiny softshell turtle. The softshell turtle is flatter and more circular than the sliders, and its limbs have a meatier look. In addition, it possesses an unmistakable snout, like a miniature version of an anteater’s. 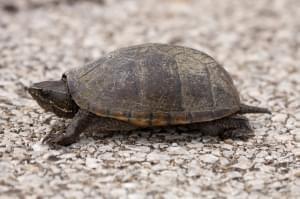 Think about it. If you get to know these common turtles, you’ll be ready to recognize a rare one, whether it’s near the water or crossing the road.