Lyndon Johnson and Europe In the Shadow of Vietnam 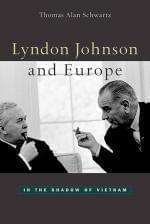 Traditionally seen as a master of domestic politics, Lyndon Johnson is frequently portrayed as inept in foreign relations, consumed by the war in Vietnam, and unable to provide vision or leadership for the Western alliance. In this persuasive revisionist history, Thomas Alan Schwartz takes issue with many of the popular and scholarly assumptions about the president seen as the classic "ugly American."

In the first comprehensive study of Johnson’s policy toward Europe--the most important theater of the Cold War--Schwartz shows a president who guided the United States with a policy that balanced the solidarity of the Western alliance with the need to stabilize the Cold War and reduce the nuclear danger. He faced the dilemmas of maintaining the cohesion of the alliance, especially with the French withdrawal from NATO, while trying to reduce tensions between eastern and western Europe, managing bitter conflicts over international monetary and trade policies, and prosecuting an escalating war in Southeast Asia.y.