Tour of Duty: John Kerry and the Vietnam War 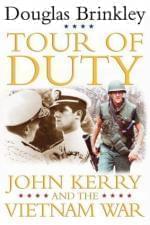 An interview with the author Douglas Brinkley, professor of history at Rice University and a contributing editor at Vanity Fair.

Covering more than four decades, Tour of Duty is a definitive account of John Kerry's journey from war to peace. Brinkley draws on extensive interviews with virtually everyone who knew Kerry in Vietnam. Kerry also gave Brinkley access to his letters home from Vietnam, his "war notes" journals and personal reminiscences written during and shortly after the war - material that has never before been published.

In the book, Brinkley deals with issues like U.S. atrocities in Vietnam and the bombing of Cambodia. Based on information from the Nixon tapes, Brinkley reveals how White House aides Charles Colson and H. R. Haldeman worked to discredit Kerry. Refusing to be intimidated, Kerry ran for public office, eventually becoming a Senator from Massachusetts.