On Their Own: Women Journalists And The American Experience In Vietnam 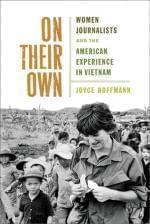 More than three hundred women journalists were accredited to cover the war in Vietnam. Many won esteemed prizes for their reporting, including the Pulitzer, the Overseas Press Club Award, the George Polk Award, the National Book Award, and the Bancroft Prize for History. Several lost their lives while covering the war, and many others were wounded or taken prisoner. In On Their Own, veteran journalist Joyce Hoffmann tells the largely unknown story of a central group of these women, including Dickey Chapelle, Gloria Emerson, Kate Webb, and others. Each has a unique and deeply compelling tale to tell, and vivid portraits of their personal lives and professional triumphs are woven into the controversial details of America's twenty-year military involvement in Southeast Asia.

Guest host: Ron Yates, Dean of the University of Illinois College of Media.