We Are Soldiers Still: A Journey Back to the Battlefields of Vietnam 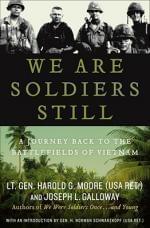 In their follow-up to the classic bestseller We Were Soldiers Once...and Young,  Joe Galloway and Lt. Gen. Hal Moore return to Vietnam and reflect on how the war changed them, their men, their enemies, and both countries - often with surprising results.

More than fifteen years since its original publication, the number one New York Times bestseller We Were Soldiers Once...and Young is still required reading in all branches of the military. In their new book Moore and Galloway revisit their relationships with ten American veterans of the battle—men such as Sgt. Maj. Basil Plumley and helicopter pilot Bruce "Old Snake" Crandall—as well as Lt. Gen. Nguyen Hu An, who commanded the North Vietnamese Army troops on the other side, and two of his old company commanders. These men and their countries have all changed dramatically since the first head-on collision between the two great armies back in November 1965.