Valley of Death: The Tragedy at Dien Bien Phu That Led America into the Vietnam War 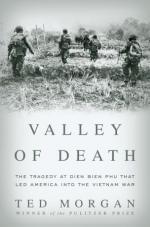 In Valley Of Death, Pulitzer Prize–winning author Ted Morgan provides a definitive account of the fateful battle that ended French rule in Indochina, and eventually led America into the Vietnam War. Dien Bien Phu was a remote valley on the border of Laos along a simple rural trade route. It would also be where a great European power fell to an underestimated insurgent army and lost control of a crucial colony. Valley of Death is the untold story of the 1954 battle that, in six weeks, changed the course of history.