Money and Morals in America: A History 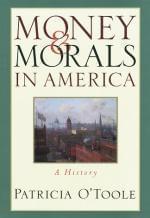 An interview with author Patricia O'Toole.

In her book, Patricia O'Toole explores the sources of American beliefs about self-sufficiency, opportunity, poverty, wealth, and social responsibility. Among them are Winthrop's determination to found a godly kingdom in Massachusetts, Colonel James Oglethorpe's doomed effort to keep Georgia free of slaves, class warfare in New England's early textile mills, Emerson and Thoreau's protests against the American preoccupation with getting and spending, the self-destructiveness of the planter class of antebellum Georgia, the contradictions at the core of Carnegie's philanthropy, the back-to-the-land dreams of a group of Tennessee poets disenchanted with big business, Whitney Young's courtship of the business establishment during the civil rights movement, and the promising opportunities for social change opened up by the shareholder activism of the Interfaith Center on Corporate Responsibility.