Life Patterns in the U.S. - The Vietnam War 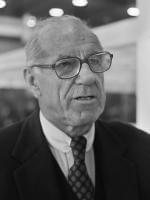 On the campus of the University of Illinois at Urbana-Champaign, pediatrician Dr. Benjamin Spock shares his views on issues ranging from war, racial discrimination and poverty. He says the Vietnam War is a violation of international law, and is simply another example of America's imperialistic tendencies. On the issue of racial discrimination, Spock criticizes the notion that people who are discriminated against should be justly to their oppressors. Finally, he says the federal government should provide more assistance to people struggling with health coverage, poverty and education.