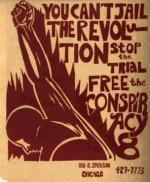 On the campus of the University of Illinois at Urbana-Champaign, activist John Froines and attorney William Kunstler talk about the infamous “Chicago Seven” case in which several defendants, including Froines, were put on trial for inciting a violent riot during the 1968 Democratic National Convention. Kunstler successfully defended the protesters who were put on trial. Kunstler says in the midst of a social revolution, “there is apparently not going to be an ear to listen to protest, or if the ear is listening it is an ear which is clogged.” He encourages people to take their protest to another level if no one is listening.