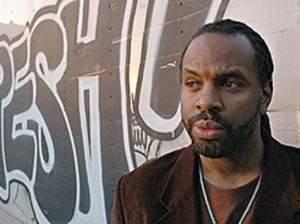 Hip Hop: Beyond Beats and Rhymes: A Local Response

Year four of the Youth Media Workshop (YMW) was unlike any other. Male and female graduates of the program worked together. And they brought independent filmmaker, Byron Hurt, to town for a public film screening and discussion. The team gave themselves a special name: The Black I.” I standing for inquiry, information, and industry.

Hip-Hop is their music and Byron’s, too. Despite his love of hip-hop, Byron was concerned about the misogyny, homophobia and sexism in mainstream hip-hop music and videos. So he made a film about it called  Hip-Hop: Beyond Beats and Rhymes to stimulate discussion about the industry, the music and violence against women in society.

Bryon’s film was shown nationally on PBS in a series called “Independent Lens.” What were the chances he would come here? Jay Walker, a YMW participant and hip-hop artist himself, wrote to Byron and asked him to come.

Here is an excerpt from Jay’s letter to Byron:

Our intentions with your film are to display and/or portray Hip-Hop for what it really is, and attempt to receive the amount of respect WE give to Hip-Hop, from other ethnicities and cultures. You have no idea how much it would mean to us if we could have you here to partake in this history making event. I hope that you and the people of my small community understand that the Black I group is more than a bunch of young researchers who know how to use cameras, we are a movement.

Byron came, met with the Black I at WILL-TV and had dinner with them before the screening. The auditorium at the Spurlock Museum where the screening was held was packed with people of all kinds, and more than 100 were turned away due to limited seating capacity.

Laina Smith and Tiera Campbell videotaped the panel discussion of the film and Henry Radcliffe of WILL-TV edited it and YMW co-directors, Will Patterson and Kimberlie Kranich, produced it. The program, Hip-Hop: Beyond Beats and Rhymes, A Local Response aired on WILL-TV on May 25, 2007 after the showing of Bryon’s film.

The film provoked many thoughtful discussions between Black I members. You can see parts of their discussion in the videos section of the site

Hip Hop: Beyond Beats and Rhymes: A Local Response Blog

Byron, Jay and Kenny outside WILL-TV

More on Hip Hop: Beyond Beats and Rhymes: A Local Response