Amby Burfoot won the 1968 Boston Marathon. Since then he’s gone on to change the face of running though his stint as Editor-In-Chief of Runner’s World.

He still contributes regularly to the magazine. Burfoot says, however, that his proudest accomplishment in running isn't winning Boston but running the annual Manchester Connecticut 5-Mile Road Race on Thanksgiving Day for 52 years in a row.

Burfoot was in town for the Illinois Marathon Expo. He talked with us after his presentation at the expo. He’ll be running the half marathon tomorrow. 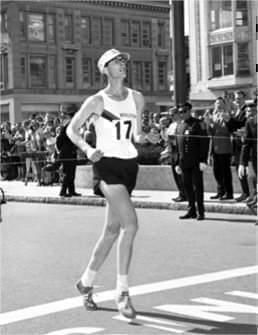 He began running as a junior in high school and was part of the cross-country team at little Wesleyan University in Middletown, CT. While there, he roomed with Jeff Galloway and Bill Rodgers, both of who went on to become major influences on the sport of running. “Jeff and I … helped each other. We ran some very, very hard work outs together and that helped us both,” said Burfoot.

In April 2013, he ran the Boston Marathon to celebrate the 45th anniversary of his 1968 win and was one of the approximately 5000 runners who got stopped less than a mile from the finish.