John W. Dean served as legal counsel to President Richard Nixon from July 1970 to April 1973. In April of 1973 he decided to testify about his, and others’ role in the Watergate scandal.

"I told [my lawyer] that I was doing it to end the cover-up and was perfectly willing to take responsibility for my role, so I did plead, yes," said Dean. "I didn't see it as criminal activity, I don't think anybody did - with, I'm going to tell you one exception." That exception was President Richard Nixon. 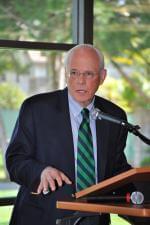 On June 3, 1973, forty-two years ago today, Watergate reporters Bob Woodward and Carl Bernstein published an article in the Washington Post detailing Dean’s senate testimony about the break-in and subsequent cover-up. He alleged that he'd discussed Watergate with Nixon more than 30 times. That testimony lead to Nixon’s resignation, and Dean spent a year and a half in the Witness Protection Program (four months of it in a safe house) and had his law license revoked. 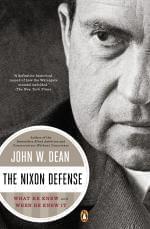 But Dean was far from finished describing what happened within the Nixon administration. He has published a book on the subject, The Nixon Defense: What He Knew and When He Knew It which bills itself as the complete story of the Watergate break-in and cover-up, and discloses Nixon’s part in it.

He says the book came from his editor asking him around the 40th anniversary of Watergate if he had any lingering questions. He did have one. How did Nixon let a botched break-in tear down his presidency? Through his research he was able to answer it.

"Well the answer was he wasn’t as savvy as I thought he was,” said Dean. “He really makes decisions that are less than thought out, he shoots from the hip, he makes false statements … and that is not a savvy politician to me.”

Dean says that there are many lessons we can learn from the Watergate Scandal including legal ethics and “the nature of scandal, and scandal is highly prevalent. Post-Watergate scandal has become the norm, whereas pre-Watergate it really was the exception,” Dean said. “Disclosure is the key to dealing with scandal – cover-ups don’t work.”