Guy Raz on Podcasts, Algorithms, And Quiet On The Radio

Pop Up Archive Item: “Guy Raz on Podcasts, Algorithms, And Quiet On The Radio” : https://www.popuparchive.com/collections/1468/items/36253
Transcript for file: web030513_guy_raz.mp3

00:00:00
F1
You just finished a season starting a new season. What can we look forward to. Well first of all Amanda let me just say that our show has suffered tremendously since you decided to leave us and go work at W I L L was just a much better show and then you left us and we’re just picking up the pieces. So we’re still hoping that we can recover. I think you’ll do fine. That’s I mean at least in the episode turned out pretty fantastic it was a fun show yeah it was a really fun show to work on and we have an a really awesome season coming up we’re doing a show. One thing I mean and I hope you learned when you were at N.P.R. was never use numbers on the radio right . Except we decided to do just that we’re doing a show all about numbers called solving for X. and we are going to look at how numbers shape our world her numbers. An algorithm is basically run the way we live our lives the way we go through our day to day experiences. Why Amazon picks certain things for you to see your prices you pay or Netflix picks certain movies how the water gas is delivered to your home how the stock market goes up and down. It’s algorithms and numbers and they are getting more sophisticated and out of control so the show has some scary bits but we also have just so you know a jazz percussionist who played with James Brown who discovered the mathematics of jazz and it changed the way he played music that sounds fantastic and if anyone can pull off numbers you guys can is this the big data idea that you’re going with this is into it’s parts of it are yeah there’s some big data stuff in this episode but it’s really you know like any of our shows it’s a narrative we’ve got Randall Morello in there the guy behind that amazing website X K C D who gets questions from people and he uses physics and cartoons to answer these questions including if you were a batter and the pitcher threw a baseball at you at the speed of light what would happen. And of course the short answer is not just the baseball field but the entire city you were in would explode into a mushroom cloud. It’s kind of stuff like that in the south. That’s really cool.

00:02:11
F2
So can we talk through the process of putting a show together gesture and I want to use one of the episodes that I was there for to do this can we talk about putting together the quiet episode. Sure if I’m remembering correctly it started with you coming in one day and saying let’s talk about introverts and then in defining that adding in the term quiet going through a whole bunch of TED Talks.

00:02:34
F3
Can you talk us through where we were just so you know how the idea sort of comes out you go into a room and spent a day there and then sort of like the smoke coming out of the Vatican like I’ll say I have a show. And so this episode really came about through a talk that I saw with Pico Iyer and Pico gave just an amazing talk about stillness. And he is an incredibly thoughtful writer who makes the case and I think a convincing case for the importance of just stillness of just being quiet just spending time without any distractions. I was really intrigued with this idea because we know from all kinds of research how meditation and quiet has huge cognitive effects on people. There’s a talk we want to use for a long time by Susan Kane who’s an introvert. And so I thought this could be an end to this idea of quiet it was a hard show to put together because how you talk about quiet on the radio right. But it turns out that lots of talks that deal somehow with a seam of quiet so we started to put the pieces together there was a wonderful talk that I saw at ted by a guy named Gavin Proctor Pinney who founded this thing called the Cloud Appreciation Society where he looks up at clouds takes pictures and then describes what they look like and he has a huge following of people and it just worked it worked in this episode because it was really just about stopping to look up at the clouds and to just enjoy them. And it’s like really simple right in that show. I still get e-mails from people about that show how much they love that show and how they felt like it really spoke to them about their own lives and how they think about their own lives that show too.

00:04:17
F2
Everything revolves around the sound design and how do you and the producers are able to mix everything together and pick the right music. It turns out very different than a lot of the stuff we hear.

00:04:29
F3
Yeah. You know what makes a show different. The space we have and the room we have is obviously very different from what like a new show would have because we’re a small team and we work so collaboratively. Right I work with every producer on every segment and then as a team you know as you know we work really really closely together we listen through to the show fully together once and then twice and then it’s only a third time third recording of the show where it’s really ready for air.

00:04:59
F4
We record the show three times before it goes on the air which is unusual there’s no other N.P.R. show that that has the time to do that but we do that because every moment every pause in every percussion sound every ping of music every space every sentence that you hear on the show is really well thought out and to get to that place takes a lot of time and so I think we’re able to do that not just because we’ve got the time but we have this incredibly collaborative group of people who all bring different strengths to the table and all use their strengths very very well and so in the end everybody owns a piece of the show .

00:05:39
F5
So where is it going are we going to hear shows that sound the same or are you guys looking at changing anything in the sound of the show or in what the show is doing.

00:05:48
F4
I think we’re always looking to change innovate. I mean I think every show is sort of beginning from scratch . They’re things that we need to that we kind of sound that we created but you know we’re a new show. We’ve only been on the air for two years. I mean Radio Lab has been on the air for thirteen This American Life. Twenty. These are shows that definitely evolved over time and I think any show is going to naturally evolve you’re going to pick up different ideas I’ve been listening a lot to invisibility of the new podcast that N.P.R. released this year that’s Give me a lot of ideas for a really cool production and their show. So there are always going to be ways that we’re going to think about pushing the boundaries and trying things in different ways.

00:06:25
F5
Another thing that I know you’ve put a lot of thought into in terms of the sound and how it looks and how it works is the host treats of underwriting you pushed for that and you’ve been doing it for a few months now. What made you so sure that was where underwriting needed to go.

00:06:42
F4
Yeah I mean you know on the radio we have now interesting Support for N.P.R. comes from blah blah blah blah blah. And that remains the same right the public radio we receive some of our funding from the federal government. And so that governs everything that we do over the airwaves when it comes to the digital sides of talking about podcast if you listen to our show in the pod cast you will hear me say hey everybody quick thanks to one of our sponsors. Blah blah blah blah blah and I usually sort of write something or they’ll give me some suggested copy and the reason why we do that is very very simple. We have six people we’ve got to pay them. We’ve got to generate money so N.P.R. can create other programs. And so I think there’s a real shift in the way that certainly on the digital side we’re seeing this concept of sponsorship and advertising you know it’s a brave new world and it’s an experiment. But I think if it works right and we can do it with integrity and with transparency and we can be really honest with our listeners I think they’re very forgiving. The beauty of all this is that if you want to you can just fast forward through it on the digital side. And you know we’re really careful about working with sponsors who make products that align with what we hope to represent you know innovation and technology and things like that.

00:08:03
F4
I think because people are hungry for ideas Amanda. I think people hear the news and they hear the depressing things in the world and they want something meaningful and they want to feel part of something bigger and they want to understand that we are basically a primate species and whether you live in Dakar or in Detroit or in you know New York City or in Paul you will experience happiness and grief and compassion and creativity and love. And those are things that basically make us the same. And I think that’s why the show has been successful because ultimately it’s about us and our experience as as humans.

The TED Radio Hour launches its third season this Saturday with a show called Solving for X that explores how algorithms influence our daily lives. Producer Amanda Honigfort, who was TED Radio Hour’s intern before coming to WILL, spoke with TED Radio Hour host Guy Raz about what we can expect, how the show is produced, its detailed sound design, and his push to put host-read underwriting in the podcast.

If you listen to the podcast of the program, you may have noticed a change last September. That’s when host Guy Raz started to read the underwriting announcements himself, a practice he championed. NPR has seen success with this practice and more of their non-news programing is following suit. 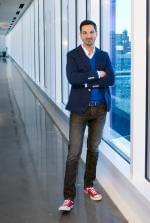 "Its a brave new world and it's an experiment, but I think if it works right and we can do it with integrity and transparency, and we can be really honest with our listeners, I think they are very forgiving."

Raz says the show sounds the way it does in large part because of the time they have to put a show together, and because the six producers and he work very closely together. "We have this incredibly collaborative group of people who all bring different strengths to the table and all use their strengths very, very well. And so in the end everyone ends up owning a piece of the show," Raz says.