To Write Love On Her Arms Founder Says Help Is Necessary

In 2006, when Jamie Tworkowski met Renee Yohe she needed help getting through a five day detox to enter a treatment center. He wrote a short story called “To Write Love on Her Arms” about those five days, posted it on MySpace, and received a large response. Before long, Towrkowski quit his job with a surfing company and founded a non-profit of the same name. To Write Love On Her Arms helps people with depression, substance abuse, and self-injury. 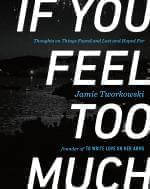 A collection of 44 stories, poems, and emails from his years working to help people with depression, substance abuse, and self-injury. "The real hope is to shine the light back on the reader and say this is about you, this is about your life. Your life matters as much as mine."

One way he tries to show that is by always using lowercase letters to refer to himself, while always still using using an uppercase letter when writing others' names. "I've done it for as long as I can remember," said Tworkowski. He said that when he announced there was going to be a book, people began asking about whether the practice would continue in the book too.

"It felt right to be consistent and I was glad that the editor was open to that," he said.

Tworkowski himself has struggled with depression, something that has made his work even more personal. "I was comfortable telling people that it was ok to get help, that it was ok to take medicine, but I had never taken those steps in my own life. And that has changed, over the last few years. I've been able to do those things and I'm thankful." said Tworkowski. "Even with what I do, even with my position with the work that I do I wasn't immune from the stigma."

Tworkowski will be in Chicago on June 8th.