Many Illinois inmates are not met at the prison gates by family or friends. Instead, they pack all their belongings into a small box or bag, get a train or bus ticket, and $10 to become productive citizens.

Every day, white vans pull into the parking lot of the Amtrak station in Effingham, in southern Illinois. From a distance they look like regular 15-passenger vans, but up close a metal screen separating the driver from the passengers in the back can be seen. The doors of the vans each have a small crest that says Illinois Department of Corrections. 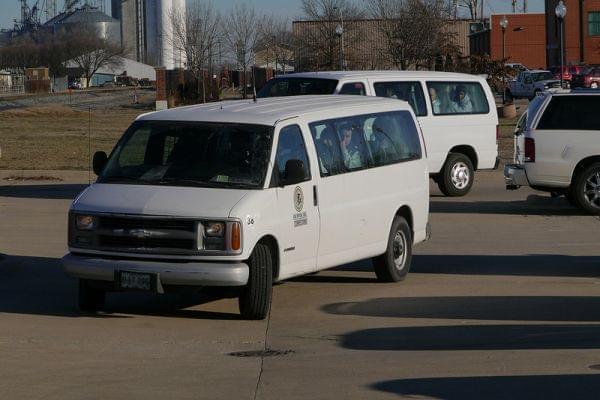 On a recent morning at the train station, four IDOC vans pulled into the parking lot: two from Vandalia prison and two from the Robinson Correctional Center.

Two correctional officers parked at the north end of the parking lot, and almost two dozen just-released inmates got out and listened quietly as one of the officers handed out train tickets and money. Each inmate is entitled to the money he has got in his commissary account, but many do not have any money in their accounts so they are given $10.

All of the men are wearing gray, prison-issued sweat suits that are exactly the same, and most carry a large envelope or two with their release papers and other documents. Most also have either a small bag or shoe box with all their belongings.

Ryan Freeman was in Vandalia for a gun charge and is headed home to family in Englewood on Chicago’s South Side. He lists off what he’s got: “A shirt. Sweater. You know, little simple stuff, you know. Have to keep my Bibles, you know, stay in contact with the Lord, you feel me, because he’s the only one that got me through what I had to got through.”

Like a lot of men just leaving prison, Terry Lawhorn is carrying few possessions, but a lot of baggage. Lawhorn seems unlikely to return to prison.

He said this was his first time inside after dealing cocaine for 23 years without getting caught, but he said he has learned his lesson.

“Really hurt my family a lot, kids probably hurt more than anything, a lot of embarrassment,” said Lawhorn. “It’s just something I wouldn’t want to take the family through again. So, it’s over for me. I mean I’ll leave it to the young guys who want to deal with all that. As long as I got a roof over my head, some food on my table, stick close to Jesus, and I’ll live the rest of my life being content with that.”

Everyone leaving prison said they are done committing crimes, but of course that is often not the case. But Lawhorn has more going for him than most of the men waiting for the train. He has got a wife, two kids and, perhaps most important given how hard it is for ex-felons to get hired, he owns a small business.

“Well, I do landscaping and snow removal," he said. "I been doing it for foruteen years in Kankakee. But I’ve got an opportunity to go to Roosevelt University in Chicago; they sent me some papers to apply so I’ll probably try to get in there." 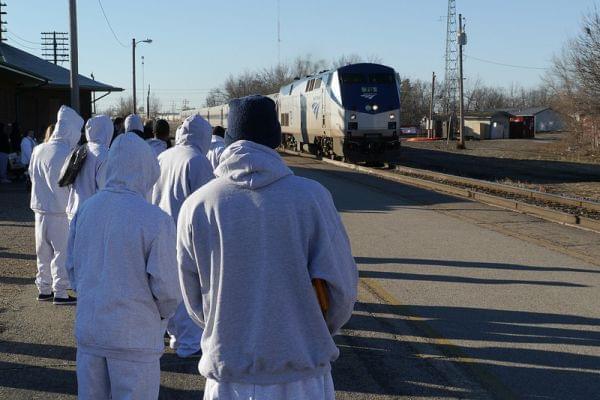 Other inmates stand near Lawhorn. Many of them will likely be back in prison, as the recidivism rate is more than 50 percent.

“A lot of guys don’t have a plan, they don’t have anything to look forward to and the only thing they know is probably what they been used to doing,” said Lawhorn.

Another just-released inmate, Chester Ryan, heads into the train station because it’s cold out and the prison did not give any of the men coats, or even jackets. Ryan holds out his sweater.

“Feel how thin that is,” he said. “It’s a nice hoodie but you’re freezing and you’re a little cold out there, just jogging pants and a hoodie sweatshirt.  I expected a jacket hopefully.”

Ryan looked at the large shoe box he set down on a windowsill in the station.

Ryan is headed to Bloomington. He hopes to seek out a church soon to get some clothes, including a jacket because he is wearing all the clothes he has. He has a friend who will put him up for two months, but after that he is afraid he will be going to shelters.

Ryan is a sex offender. He was in prison for child pornography. He said he is going to look at the sex offender laws in all the states and move to wherever the rules are most lenient. 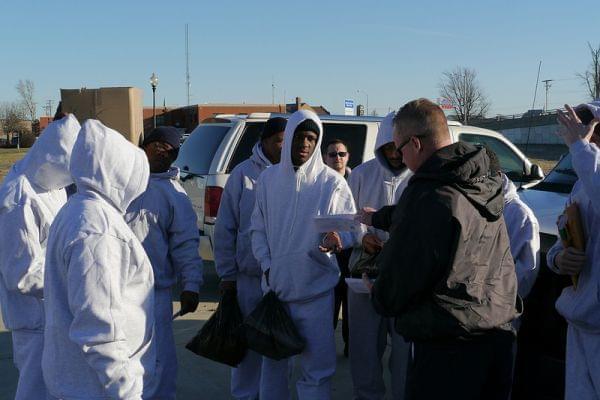 “It’s smarter to look at the rules for each state and say okay, which rules can you live with to stay out, to not go back to prison for a registry charge,” said Ryan.

Ryan said it is not that he wants to reoffend. He just does not want to end up back in prison for something like looking for work on a computer, which could violate some rules against being online, that kind of thing.

“You know, I think they should of gave a person with one count of child pornography a second chance to say, hey, register for ten years, ten, fifteen years instead of life,” said Ryan. “I think that’s a little harsh, life.”

Perrin Dunlap is another former inmate with a difficult road ahead. He just served eight months and it was his eighth time in prison. He has burglary and theft charges, but he said for him, it all goes back to one thing: heroin.

“And they say people, places and things, but it wasn’t the case," said Dunlap. "It’s always something different, it was just, that you know, that desire, you know, that addiction is, it’s poison you know, and I know it, but thought that I could still do it."

As the train rumbles toward the station the men in gray sweat suits make their way from the parking lot to the platform. When the train stops a conductor comes out and tells the now freed prisoners to stay where they are. He invites all the other people: families, couples, a small school group of some sort. All of them are invited on to the train first.

One inmate who just gives his name as Stewart quietly complains. 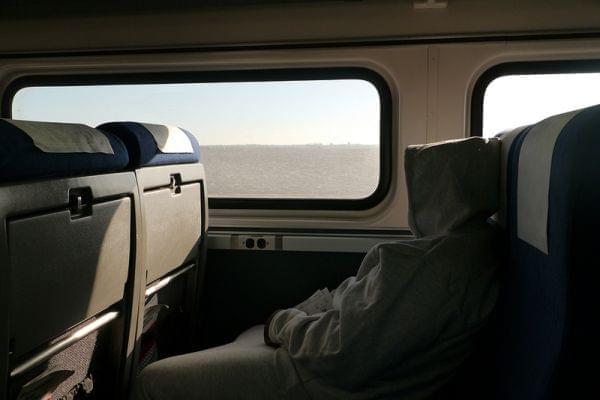 “See how they do us?" he said. "That’s crazy. It be like that sometimes especially when you black though, you know what I’m saying?”

The slight is pretty much the first thing to happen to these men upon release from prison, a less than encouraging welcome back to society. Other than a few resigned murmurs, the men stay put and do as they are told.

When they are allowed onto the train they all get seats, though the car is pretty full.

Perrin Dunlap looks out the window as the train cuts through the flat fields of southern Illinois and talks about his next steps. He said there is a Catholic Charities facility in Chicago that he is hoping can help him out and he plans to get a Link card so he can get something to eat. He insists he’s not going back to prison a ninth time.

When Dunlap gets to Chicago he plans to walk from Union Station to the Pacific Garden Mission shelter south of Roosevelt Road on Canal. Like many of the other ex-felons on this train, Dunlap has just $10 in his pocket.

Every year more than 33,000 men and women are released from Illinois prisons and make a similar journey facing similar odds. That is about 127 people every single weekday.