Area Playgrounds Staying Ahead Of The Curve

In March of 2012, the federal government declared access to playgrounds a civil right, protected under the Americans with Disabilities Act.  But sites in Danville and Urbana have stayed ahead of the mandate.

Public play areas now must be accessible to children in wheelchairs or with other disabilities.

It was awfully quiet early last week at the Playground for Everyone in Danville. That is not surprising, given the recent heat wave. But 11-year old twin brothers Rylan and Alex Whiteman do their best to stay cool with temperatures in the mid-90's, using the swingset.

One of Rylan’s favorite spots, the ‘sprayground’ at Danville’s Garfield Park, was shut down on Labor Day

“When you stay there by the sides (walls of the playground space), like, for too long, water comes down, like splash!" he said.

Rylan has cerebral palsy, and he leans on Alex a lot – often asking his brother to lift him down when hanging from the monkey bars. During the summer, their mom Rachel makes the 40-mile trip to Danville from the community of East Lynn, near Hoopeston – usually twice a week.

“As parents with children with disabilities, we don’t see those disabilities – and so when we’re playing, it’s so wonderful that they’re just – we just see them as normal as everyone else,” she said. 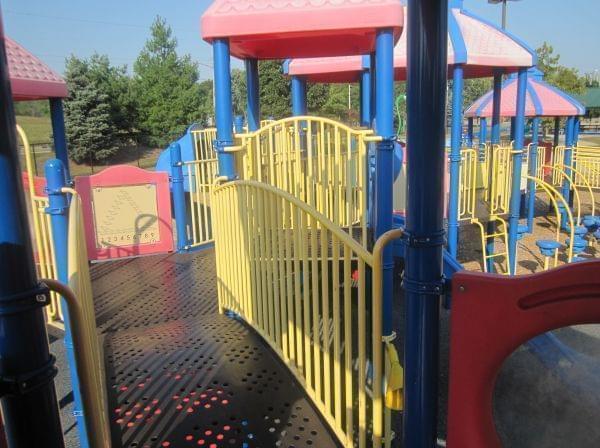 The expanded deck at the Danville playground is wheelchair accessible. (Jeff Bossert/WILL)

The "Playground for Everyone"  is truly that - built from scratch and financed by AMBUCS, short for American Business Clubs - the non-profit national service group dedicated to independence for those with disabilities.

About 15 years ago, Danville resident and AMBUCS member Bill Fulton led the project -- inspired, in part by a young family member with spina bifida.

He visited other communities with similar goals. On one playground in Massachusetts, Fulton heard the frustrations of several mothers.

Fulton, who is also on AMBUCS’ national board, said families from as far away as Indianapolis come to play at the Playground for Everyone, a site that has served as a model for universal access.

“A mom would push a kid up (the raised platform), and couldn’t even turn it around, and (the parent pushing) the wheelchair would have to back their child back off,” he said. “So that's ADA versus universally accessible.”

The universally-accessible raised playing service at The Playground for Everyone includes ramps, slides, and interactive activities. It also includes transfer stations, allowing those in wheelchairs to pull themselves out and ride down the slides.

The Playground for Everyone cost about $400,000 when it was built in 2000. AMBUCS has relied heavily on not only private donations - but those from local businesses.

Donna Carlton Vish, who handles fundraising for Danville AMBUCS, said she sees a lot of generosity despite what some industries have gone through.

“A lot of that went away,” she said. “But the hearts of those people and a lot of the workers was still the same and they said ‘we’ll help do this, we’ll pour some concrete for a cost, the water company says ‘we’ll provide some water at no charge.”

On Sept. 5, a crew with the city’s Park District (with some help from cadets at Lincoln’s Challenge Academy) spread out what looked like wood chips, putting the finishing touches on the newest playground in the area.

“This is what they call wood safety surface,” said construction supervisor Keith Ewarks.  “It has to meet a certain standard and screening, and it’s mostly all hardwoods. So when it actually compacts, it forms a mat, and you can use a wheelchair across it.” 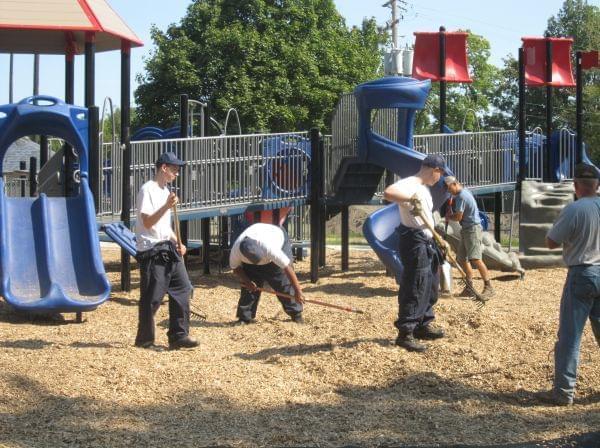 Like the parks in Danville, AMBUCS Park in Urbana went through an ADA audit just over two years ago. Parks must provide basic access to the handicapped, but AMBUCS said their play areas go further – they are universally accessible.

AMBUCS Park, which the Greater Champaign County AMBUCS took over in the early 1990’s, includes not only a new playground, but a series of percussion instruments that anyone can access. The park held a ribbon cutting for its new playground over the weekend. It includes a revamped accessible playground, and wheelchair-accessible bleachers for its challenger baseball league.

Incoming Chapter President Keith Jamieson said kids using the park want more advanced equipment to get around as well, including AmTrykes, tricycles you can pedal with your feet, or hands.

“We’ve got this whole range of autistic kids now, and when they get on these Amtrykes that can move – they can power these Amtryks right up these ramps and everything," Jamieson said. "It just brings them out of their shell to be able to do that."

Along with AMBUCS and their donors, there is an ongoing effort within cities like Champaign and Urbana to upgrade park facilities, using local tax dollars. But universal park access is not unique to the region.

“Special recreations are all over Illinois,” she said. “Illinois is the only state that has these type of agencies in that where park districts have come together to create an agency themselves that has the expertise and surveyed people with disabilities.”

But Schaefer says there’s always more upgrades to be done, seeking out the help of AMBUCS and their many donors, and most often through grants.

Danville AMBUCS Board member Bob Richard said these upgrades do more than give kids a chance to have fun together.

“Kids learn during their play activities,” he said. “And that’s how they learn their social skills. And if they get to play with the people of all abilities, all races, all ethnic backgrounds, they grow much more accepting manner.”

Parks in three parts of Danville now have some sort of handicapped-accessible facilities. Richard said some local schools in the city have also added accessible equipment in their playgrounds.