Pedro Reyes says being Mexican is like living in an apartment where an upstairs neighbor has a leaking swimming pool.

"Just what is leaking," says Reyes, "is hundreds of thousands of guns."

He wants people to think about the availability of guns in the United States, and the impact that has in Mexico.

At the University of South Florida in Tampa, he recently held a series of workshops and a performance, using theater to encourage a discussion about guns. It's called "Legislative Theater," a style of performance pioneered in Latin America in the 1960s to influence social change.

In Tampa, Reyes called his project "The Amendment to the Amendment." Specifically, the Second Amendment to the U.S. Constitution, which guarantees the right to bear arms. Reyes asks his actors and the audience to consider if there are possible changes that might improve the amendment

Reyes also addresses the issue of gun violence in another way, by using guns themselves. His first project began in 2007 in the Mexican city of Culiacan. As part of a campaign to curb shootings, the city collected 1,527 guns. He used them to create art.

"Those 1,527 guns were melted and made into the same number of shovels," he says. "So for every gun now, there's a shovel. And with every shovel, we planted a tree."

Now Reyes is working on a new project. It is one that transforms guns into something more musical.

An exhibition of the work is on display at the University of South Florida's Contemporary Art Museum. It's called "Disarm," and consists of guns that have been turned into musical instruments.

Pedro Reyes says he believes art should address social issues like gun violence, even if the issue is difficult or controversial. 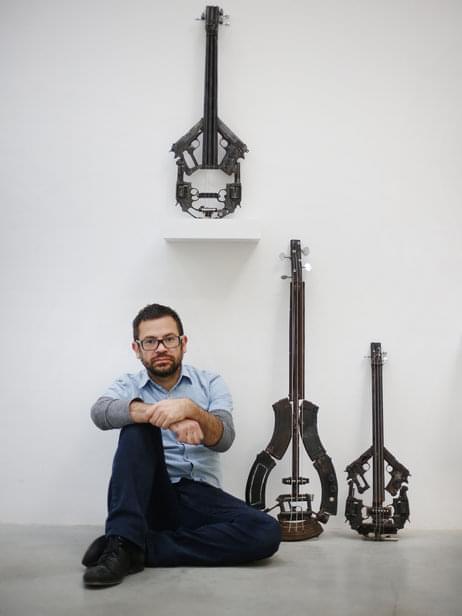 Pedro Reyes says he believes art should address social issues like gun violence, even if the issue is difficult or controversial. (Peter Macdiarmid/Getty Images)

One is a marimba made entirely from gun barrels, cut to different lengths to play a musical scale. "You have these different notes, so you know, you can bang and say this is an A, this is a B, this is a C, depending on the length of the barrel."

A few years ago, a government agency in Mexico gave Reyes 6,700 guns that had been confiscated from criminal gangs and rendered inoperable. Since then, he's been turning them into electric guitars, violins, flutes and percussion instruments.

Musicians and technicians help him make the guns playable; Reyes is mostly interested in the concept and how they look. When he builds them, he says, he begins by laying out gun parts on a table and visualizing how they'll go together.

"Like a kind of assemblage, like a collage, no?" Reyes says, "You put parts and then you see how they make up a shape, and that can be kind of the body of the instrument."

"It sounds a little bit more like a clarinet if anything," Murray says. "But yeah, it's a saxophone made out of a gun ... a gun barrel."

Dominic Walker and Teague Bechtel, both guitarists in the university's graduate jazz program, are playing what look like steel guitars fashioned from 9 mm semiautomatic handguns.

"That was pretty surprising the first time that we went and saw them," Bechtel says.

Laughing, Walker adds, "We just make sure the safety's on."

Another jazz grad student, Zach Pedigo, is playing a bass. The neck is made from a double-barreled shotgun. Curved magazines from AK-47 assault rifles form the body of the bass guitar.

"To me at least," Pedigo says, "the concept is about taking weapons that are destructive in nature and chaotic and trying to make them for something else. So, instead of objects of destruction, they become objects of creation."

That's exactly Reyes' point. Art, he says, is about transformation.

Asked whether that's an improvement, whether musical instruments are better than guns, Reyes responds, "Yes, I do believe guns are bad. Because, you know it's an industry that to thrive, it needs conflict."

It's a political statement that many will disagree with. But it is one, Reyes says, that is at the heart of his work.

The instruments played in concert this week in Tampa are just the first generation of his musical creations. He's now beginning to turn guns into more sophisticated electronic instruments that can be programmed through a computer. Reyes says he expects to be working on this project for some time — he still has thousands of guns to turn into art.