CHAMPAIGN, Ill. (AP) — Freshman big man Giorgi Bezhanishvili scored a career-high 35 points — 29 of them coming in the second half — to lead Illinois to a 99-94 overtime win over Rutgers on Saturday.

It was the third consecutive win for Illinois (9-15, 5-8 Big Ten Conference), and the fourth in its last five games. The Illini beat No. 9 Michigan State on Tuesday.

Bezhanishvili's free throw put Illinois up 93-92 in overtime, his jumper on the next possession made it 95-92 with two minutes left, and the Illini outscored the Scarlet Knights 4-2 from there.

Bezhanishvili scored 29 of his 35 points in the second half. His total broke the Illinois freshman single-game scoring record, set by Deon Thomas in 1990.

Thomas and Bezhanishvili met at midcourt at the buzzer and hugged for several seconds.

"We just got the big boy the ball and rode those shoulders of his for 29 second-half points," Illinois coach Brad Underwood said. Trent Frazier added 17 points and Ayo Dosunmu 12.

"They scored on all of our sets, zone and man-to-man," said Rutgers coach Steve Pikiell. "They play differently than a lot of other teams. I give them credit, but I give our guys credit, too. We both have young programs and I am so very proud of my team,"

Both teams kept pace in the first half, trading leads until Rutgers jumped ahead on a layup by Myles Johnson with 2:59 left before the break.

The Scarlet Knights led 45-42 at halftime.

The Illini were fresh off a 79-74 home win over No. 9 Michigan State on Tuesday, which saw Illinois force 24 Spartan turnovers. It was Illinois' second Top 25 win after beating No. 13 Maryland on the road. Illinois ranks second nationally in strength of schedule, according to KenPom.

Asked after the game how he played so well, Bezhanishvili thought a second and then said, "I like popcorn. Do you like popcorn? I had some before the game when I felt low energy. Maybe that was it?"

Along with popcorn, the country of Georgia native and Illinois crowd favorite also credited having his brother visiting the past week.

"Family is everything to me," Bezhanishvili said. "I have a small family and they mean the world to me. Having my brother here the past three games, I can't even explain how much that means to me. And, we won all three of them."

Pikiell's mother passed away on Saturday morning, and yet he decided to coach the game.

"We sometimes forget this is only a game," Underwood said. "I want Steve to know our thoughts and prayers are with him and his family. We're thinking of him on a really, really tough day."

Underwood on Bezhanishvili: "It's hard not to like Giorgi, his passion and confidence. We knew his IQ when we signed him, his feel and abilities. I mean, his feet are just phenomenal. I guess it pays to take dance class."

Rutgers travels to Northwestern on Wednesday. 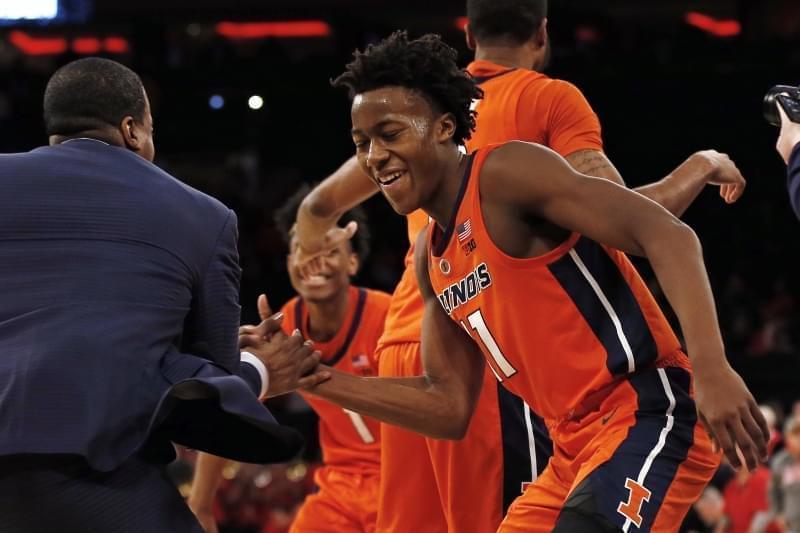