A major force for civil rights in the Champaign-Urbana area has passed away.

Erma Bridgewater died Monday at around midnight at Presence Covenant Medical Center in Urbana at the age of 99, according family members.

During a long life spent in Champaign-Urbana, Bridgewater was involved in various civil rights groups, and she regularly shared with community leaders and children the challenges that she faced as an African American woman in the formative years of the Civil Rights Movement.

In 1919, she and her brother were the only black children at Champaign’s Lincoln Elementary School. She talked about her experience in grade school during an interview several years ago with the Youth Media Workshop, a collaboration between WILL and Will Patterson, the Associate Director of the University of Illinois’ Office of Inclusion and Intercultural Relations.

“It was a good school with good teachers,” Bridgewater recalled. “I was discriminated against not by the teachers. They were especially nice. They were all Caucasian teachers, but some of the children were not as nice as they might have been. Not wanting to hold my hand, but then the teacher usually found some way to make it alright.”

Bridgewater graduated from Champaign Senior High School .  She then attended the University of Illinois, and in 1937 earned a Bachelor’s Degree in Sociology and a minor in Psychology.

“My dad was employed at the university as a mail carrier, and my parents didn't ask me if I wanted to go to college,” she said. “They just took it for granted that I was going, and I always understood that that was what I was supposed to do. So, I was expected to go to college.

Her daughter, Cassandra Woolfolk is a clinical supervisor at the Center for Youth and Family Solutions in Champaign. She remembers her mother talking about the difficulties she faced as an African American student on a predominately white college campus in the 1930’s.

“One of the stories she’s always told is having to eat lunch in the restroom at the University because there was no place she could go in for meals,” Woolfolk said. “That was a barrier that she learned to deal with and never allowed it to really stop her achievements.”

“I would buy a candy bar and an apple and go into the library restroom to eat,” Bridgewater told WILL. “So there were things that happened. And when we went to the theaters, we had to sit up in the balcony.”

“At times now when I go to the theater, I still go to the back,” she added. “At one of the theaters, what is now the Art Theater - it was Park - we had to sit down in the front row, right up in the picture. So those are things that happened then that fortunately have changed.” 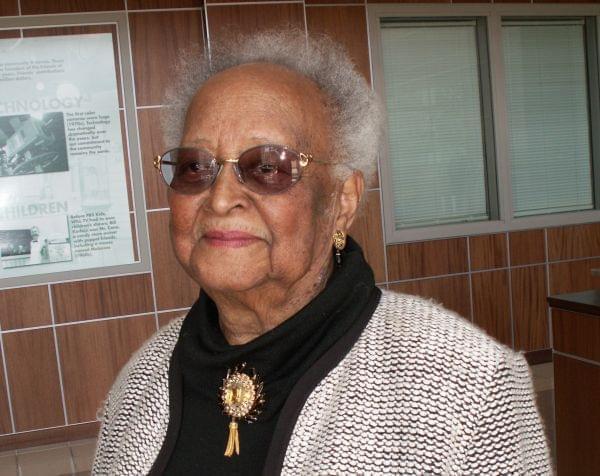 Bridgewater’s first job out of college was as a maid at Newman Hall, where she said she made roughly $1.60 an hour.

“I'd looked for a job and couldn't find any, and my mother was working there at Newman Hall, and I felt like I had to help repay my parents for the money they'd spent for me to go to school,” Bridgewater said. “So I got a job there and worked. I think it was a couple of years. I didn't wanna leave town.”

Will Patterson, a longtime friend of the Bridgewater family, said the difficulties Erma Bridgewater faced in finding a job right out of college were not a surprise for an African American at that time.

“She had to face that type of adversity, but she saw it through and positioned herself to just be a great force in her own community,” Patterson said.  “Many of the things that she may have experienced back then are still happening and a lot of stuff wouldn’t be accepted today.”

By 1939, Bridgewater became the first director of the Douglass Community Center after the city of Champaign created the Department of Recreation to replace programs through the Works Progress Administration.

“I was coming to them, not knowing anything about recreation,” she said. “I just was not accepted because I was from the other side of the tracks and all that, and had been to college and had a degree. So I learned. The way they treated me was an advantage in the end, and I was glad because it made me realize that I had to learn how to get along with people.

Bridgewater was with the Douglass Community Center until the mid-1940’s when she left to take care of her children. Woolfolk said her mother returned to the center in 1955, and left for the final time in 1963 when she was demoted.

“At some point, they decided they wanted a man to be the (Douglass Community Center’s) director, so they made her assistant director and cut her salary,” Woolfolk explained.

Bridgewater then worked for the city of Champaign as a Relocation Officer for the city’s Urban Renewal Program, where she helped relocate people living in homes that were in poor quality.

She also worked as a proof reader for the Courier Newspaper, as an Outreach Worker at Frances Nelson Health Center, and as a Housing Specialist for the city of Champaign’s Community Development Program.

Champaign County NAACP President Patricia Avery has fond memories of Bridgewater, who she knew as a young child. Avery likens Bridgewater’s impact in the community to Rosa Parks.

Bridgewater served on various boards and committees (the Champaign County Regional Planning Commission, Family Services of Champaign County, Head Start, the Urban League, Community Chest, Council on Aging, and the City of Champaign Housing Commission and Fair Housing Board).  She was also a charter member of the local graduate chapter of Alpha Kappa Alpha Sorority and a charter member of the local chapter of the National Council of Negro Women.

She received numerous awards and honors over the years. They included a mini park named after her in Champaign, the Living Legend Award presented at the UIUC Black Reunion, and the Champaign County Martin Luther King Day Award.

“She was full of life,” Patterson said. “She was not one that would be considered sit back on a porch somewhere and just watch the days go by.”

Bridgewater was also an avid swimmer, and swam five times a week until a month before her death.

She said as a student at Champaign Senior High School, African Americans were not allowed to take swimming classes with white students. Instead, special arrangements had to be made.

“They had some of the seniors or some of the older students teaching the class and they spent more time laughing at us, at our efforts to swim than they did at teaching us,” Bridewater said.

Also, she loved jazz music, which would rub off on her sons.

Ron of Urbana teaches jazz, saxophone and improvisation at the University of Illinois at Urbana-Champaign, and Cecil of Englewood, N.J. is a noted jazz trumpet player and teacher.

Bridgewater’s husband, Cecil Bridgewater was from Tuscola, Illinois. He died in 1999. The two had been married for nearly 60 years.

In addition to her three children, she leaves behind a niece, Loretta Scott Davis, nine grandchildren and two great-grandchildren.

“One of the things she said a number of times when she was in the hospital right before she died that she feels like she had a very good life,” said her daughter, Cassandra Woolfolk. “She was just very, very blessed with the life that she had led.”

Bridgewater was a member of Bethel A.M.E. Church in Champaign from the age  of 12 and a member of the Bethel Choir for more than 80 years. Her wake and funeral service is scheduled this week at the church. The wake is Friday from 6pm-8pm, and the funeral is on Saturday at 11am.

“As long as her memories live on with all of us and she’s touch so many generations, her life and legacy will live on for many years,” said Champaign County NAACP President Patricia Avery. “I think she will never be forgotten.”