The African-American entertainer Josephine Baker (1906-1975) lived an exciting life that Patricia Hruby Powell saw as one that young people should know about. 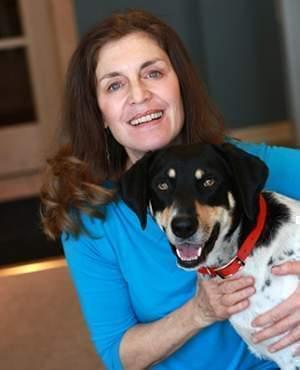 The Champaign-Urbana writer, storyteller and dancer is the author, with illustrator Christian Robinson of "Josephine: The Dazzling Life of Josephine Baker", published earlier in 2014 by Chronicle Books.

Powell is the author of three other picture books for children. She says she's currently working on a book about Lil Hardin Armstrong, second wife of jazz trumpeter Louis Armstrong, and an accomplished musician and songwriter.

00:00:00
F1
My hope in this book. Josephine the gambling life of Josephine Baker will make joking Baker better known. It’s not only kids that don’t know who Josephine Baker is but plenty of adults who don’t know where is everybody in France. Everybody in Europe knows who Josephine Baker is. Well tell my about how you became interested in Josephine Baker And what was it about her that caught your interest. Well I’ve been a dancer my entire life I was a concert dancer and I traveled all over the world but I didn’t really take Josephine Baker very seriously I saw her as a show girl until I was in the library one day where I work at your Urbana Free Library library children’s department and there was a group of unfocused preteen girls and I thought they needed a role model so I started poking around and I saw the early footage of Josephine Baker and she was dazzling she’s in the original she’s charming. I fell in love I was smitten so I started researching her and discovered that not only was she a dancer and a singer but she worked for the French Resistance. She was an issue with a civil rights worker before the big names came on the scene. And she adopted twelve children each of a different race each of a different color because she thought that all people should live in harmony in this with her proof that it could be so for you great personality right.

00:01:42
M2
Well over many years I started researching this book in two thousand and five and in the end as it was submitted I saw it as a young adult book with black and white illustration that was just my vision of it and what I got was so much better it’s one hundred four page picture book which is very unusual. Usually picture books at thirty two pages long but Chronicle Books my fantastic publisher saw it as usual and wonderful hybrid and good and Christian Robinson illustrated it in a very child friendly manner it’s just the illustrations are just terrific. And so it’s a book made by many . Really how long is the book been out just since January. It hasn’t been out an entire year yet you don’t have a two year anniversary in a couple of days and here you are.

00:02:50
M2
I see kids light up I’m particularly happy about that. Kids of color who are mesmerized by the book they see themselves in the illustrations if you themselves in the story and that’s not altogether usual because most books the great majority of books in America are with white characters and so this is sort of wonderful to me for the kids who I most want to see this book really see it and see themselves in it.

00:03:22
M1
How many different facets of Josephine Baker is life do you touch on in the book.

00:03:28
M2
I think you’re away from the scandal there were definitely a lot of scandal in her life but it starts with her childhood because I figured the kid they’re interested in childhood she grew up the poorest of the poor and then I sort of base the trajectory of her character. Josephine respond to the riot of black Yves St Louis and I think that about nineteen sixteen and our youth the image of a volcano and say that grew tighter and tighter and then it came out a funny face that used to be fear . So there’s a very difficult beginning and she’s performing out in the streets and then she’s performing at the Booker T. Washington theater and she’s going down into the black South and dodging through a whites only phone in the Ku Klux Klan. And then she leave the Dixie steppers the group with whom she’s been performing and she got to New York and she performed with it all right. No no shuffle along the first black performing in a Broadway production that hit the white scene in the white people loved it and that was the first and then she goes to Paris and she put forth a lot right. You Negra and she becomes a star in Paris in a way that she could never in America because America with two races and that she style stars in the fully bare chair and she performed all over the world but she can’t make it in racist America. She tried being asked to be a star field Alis the first Negro star effort but they really you know they called her a negro wench and she had to walk in the back door to do the performances. She goes back to parish American millionaire. She start World War two begin and she starts labeling soup and flying for the Red Cross because I know she’s a pilot. She works for the French resistance they eventually get her lazy or worked for being a hero she’s willing to she was willing to risk her life because France made her what she was. And then she’d buy a mansion in a dock for twelve children. But now she’s not quite so popular anymore and she’s racking up bills and she failed. She’s addicted from her mansion but she finally be in America. Carnegie Hall and her life and as she had hoped she’d die. Breakfast spent at the end of a dance because the doctor told her to stop but she could not stop and so she had her best reviewed ever and they’re stacked around her in her bed and she is found in a coma from which she never wakes up and it’s sort of exactly the way she wanted to go.