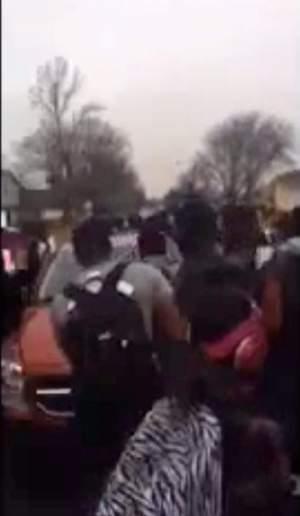 Champaign police are investigating an incident at Centennial High School in Champaign on Thursday afternoon. Greg Johnson, Centennial's principal, says a motorist drove into a crowd of students who were holding a rally in the street outside the high school to protest the grand jury decisions in the police shooting deaths of Michael Brown and Eric Garner.

Students held a "die-in" this afternoon at the school before the rally. Johnson says students were peaceful and organized with his permission. He says students went outside to chant for the news media when a car drove into the rally.

In a video obtained by WILL, chants of "Black lives matter" turn into screams as the car rolls into the crowd marching south on Crescent Drive in front of Centennial. Champaign Police Lt. Bob Rea says no one was ticketed or charged and no one appears to be injured. Rea says the driver's windshield appears to have been damaged or broken. Police are still investigating and no offical report was available.

Johnson says there was an "altercation" between students and the motorist. One Centennial student at the march said the driver waved the middle finger at students. Johnson says he heard similar reports, but could not verify it. The motorist asked to speak with police, and Johnson says the district obliged, and Champaign Police were dispatched, in addition to the school's in-house officer, who was already at the school.

Click here for the video of the altercation. (Warning: Video may contain material disturbing for viewers)