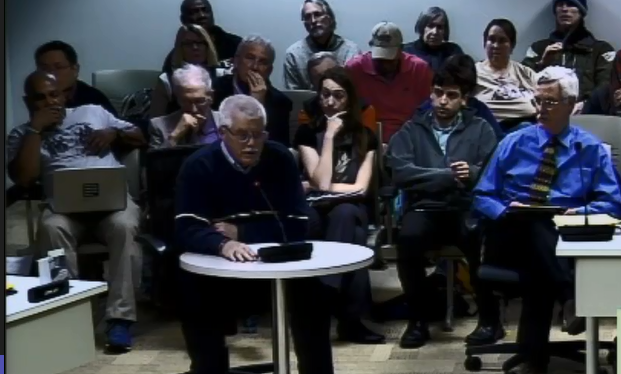 Pictured: Prairie Center Health Systems CEO Bruce Suardini was among members of the public who spoke at the Champaign County Board study session on a new jail plan.

The Champaign County Board has been presented with a county jail plan that comes with a big price tag.

A team of consultants led by Champaign-based Gorski Reifsteck Architects Consultants told the county board and members of the public at study session Tuesday night that it will cost $32 million --- more or less --- to carry out a “sheriff’s operation master plan” that includes renovating and expanding the satellite jail in east Urbana, and closing the deteriorating downtown Urbana jail. The sheriff’s law enforcement offices could stay downtown, or move to the satellite jail. Overall jail capacity would stay roughly the same, at around 300 inmates.

County Board Deputy Chair for Finance Christopher Alix noted that the county can’t afford a $32 million jail project with its current revenues, something he called “the elephant in the room”.

“The only way that a project of this scope is going to happen is if this board and the voters of Champaign County approve a referendum for a tax increase”, said Alix, an Urbana Democrat.

Several county board members, as well as several members at the public who spoke at last night’s study session, expressed skepticism that spending money on a new jail was the best or sole option. They argued for more programs to address mental illness and substance abuse problems as ways to control Champaign County’s incarceration rate.

One of those included county board member Sam Shore, a Champaign Democrat. He said that without such programs built in, the jail plan would not meet current needs. Shore referred to county board member James Quisenberry’s comment calling the proposed jail project “the Lexus of jails”.

“I have to disagree with him”, said Shore. “I think this is the DeLorean of jails, which is to say that this would be totally sleek and modern thirty years ago, but we now know it’s a high priced product that doesn’t meet the needs of those inside."

Alix said he agreed that such programs are important, but that they can only do so much --- and that the county still needs to invest in its jail facility.

Meanwhile, the chairman of the Champaign County board’s Facilities Committee said that the jail plan presented by the consultants is just the beginning. Mahomet Republican Gary Maxwell said his committee would now be examining the plan over the next several months.

“And we will be looking at how much money is available, what we think might be available, timelines that we can put some of these ideas together”, said Maxwell.

Any bond referendum to finance the jail project would not be coming quickly. According to the News-Gazette, Champaign County Board Chairwoman Pattsi Petrie says March 2016 is the earliest that a bond referendum could be placed on the ballot. And she said that date could be in question, if Champaign Unit Four voters reject a tax increase proposal for school construction on the upcoming April 7th ballot.

Champaign County Board Drops Downtown Jail For Future Use

County Board Has Mixed Reviews Of Final Jail Report

No More Jails for Champaign County