More communities are allowing residents to raise backyard chickens. Champaign recently gave the initial OK for its residents to do that, but city leaders must first come up with an ordinance for chicken owners to follow.

The city does not have to look far to see how other communities regulate backyard chickens. Jill Miller of Urbana raises hens for egg production, and she has grown attached to her birds.

“They do have a calming effect,” Miller said. “There’s something about watching them wander around the yard. Find a moth, chase after the moth, or someone finds a worm and then it’s a big chase cause everybody wants that worm. It’s fun.”

Miller has even named her birds, “Blair is the smartest one; Tootie is like the sweet one; and Natalie is bossy.” 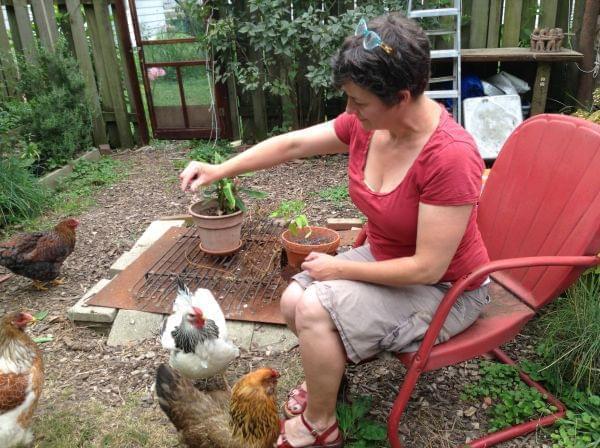 Jill Miller of Urbana feeds her bird. She has been raising hens for the last few years for their eggs. (Sean Powers/WILL)

Urbana resident Karl Schoeps lives about a mile from Miller. His next door neighbor is raising hens, and he said he has put up with odor problems, and birds winding up in the middle of the street or in his yard.

“I mean they’re beautiful,” Schoeps said. “But I like them on the farm, on the grill, or in the pot.”

On a recent morning, Schoeps looked over his fence to his neighbor’s yard.

All of the problems Schoeps said, have hurt the value of his home.

Over in Champaign, Martin and Angie Wolske say backyard chickens are the next logical step in urban agriculture. The Wolskes grew about 300 pounds of produce last year. They hope the Champaign ordinance allows them to use chicken manure in their compost pile. They also want to put the birds to work.

“When we’re out doing work in the garden, we’ll be able to put up fencing and have them just run through the raised beds,” Martin explained. “So that they can actually be doing a light tilling of it, eating up the weed seeds that already had landed, catching little bits of insects that are starting to come up, and so they’ll actually help us with the gardening.”

“You can give chickens like egg scraps and meat scraps, and they’ll take care of all of that,” Angie added. “That won’t be in my garbage can, so that’s important to me.” 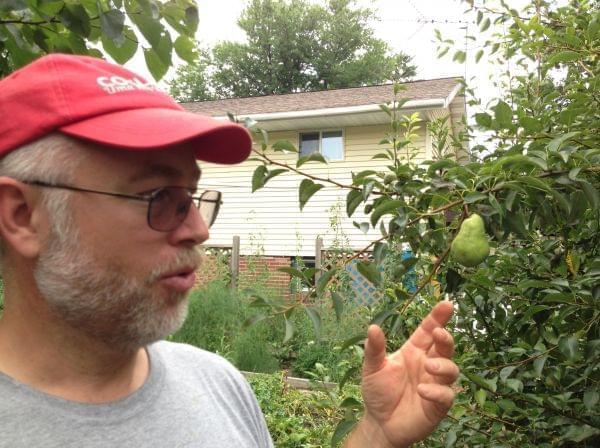 Martin Wolske looks at a pear growing in his front yard. He and his wife live in southwest Champaign, and they are anxiously waiting for the city to allow residents to keep backyard chickens. (Sean Powers/WILL)

But before that can happen, the city has to come up with the rules.

Champaign City Planner Lacey Rains Lowe is working with officials in other city departments to draft the ordinance. They are studying backyard chicken rules in cities like Urbana, Madison, and Seattle. In crafting Champaign’s policy, Lowe is looking at the number of hens allowed, whether to require permits, and the design of coops and fences that are predator poof and meet zoning codes. She’s also reviewing complaints from other communities.

“Generally those are related to noise, which goes back to not permitting roosters, and potential complaints about keeping the chickens contained,” Lowe said.

The city of Urbana relies on an animal control officer when issues come up.

Urbana Alderman Charlie Smyth said he has not heard many problems about backyard chickens. The city does not have one policy regulating them, but instead turns to other ordinances dealing with things like animal cruelty, odor, and noise. Still, Smyth said other communities might be better off coming up with a single policy for backyard chickens.

“Our noise ordinance has been beefed up through the years for other reasons,” he said. “We don’t need to have two variations of it or three variations of it when you want to keep your code simple. But if you’re starting out brand new - you don’t have a collection of ordinances – I could see trying to put a lot of things in one ordinance just to make sure you cover all your bases.”

As Champaign drafts its ordinance, Lowe said the city would not restrict certain types of hens, but unlike Urbana, it would definitely ban roosters. She noted it is important Champaign’s ordinance is not too much of a burden on chicken owners and city staff.

“If you write it into the ordinance, is there going to be a staff person to verify that or check on that?” she said. “I can tell you the police are not interested in becoming the Chicken P.D., either. So, we’re really trying to strike a good balance.”

Lowe said she does not know when a final ordinance will be released. Whatever the policy, some Champaign residents still may not be able to have chickens since certain subdivisions in the city do not allow the raising of poultry.