In a hearing lasting less than five minutes, Brendt Christensen entered a “not guilty” plea Thursday in a federal courtroom in Urbana to the charge of kidnapping Yingying Zhang.

Prosecutors accuse Christensen, a recent University of Illinois graduate student, of abducting Zhang, a U of I visiting scholar from China, from a campus bus stop on June 9.

Judge Eric I. Long has scheduled a jury trial for Christensen for September 12, following a final pre-trial court appearance on August 28.  Defense Attorney Anthony Bruno says they’re considering a request for a change of venue, given the notoriety of the case in Champaign-Urbana.

Christensen’s arraignment in Urbana was attended by members of Zhang’s family, and a sizable contingent of reporters.

The prosecution declined comment following the hearing. But reporters gathered outside the courthouse around defense attorney Bruno.

Aiming his remarks at Chinese and other Asian media, Bruno argued that Christensen had a right to defend himself in court, and that they should not take Zhang’s disappearance as a sign that foreigners or immigrants were not safe or welcome in Champaign-Urbana.

“We welcome with open arms citizens from around the world and we look forward to defending vigorously the rights of our client in this case,” said Bruno.

Bruno reminded reporters of a recent case where a missing person had turned up unharmed, and had been found to have disappeared “by her own design,” an apparent reference to 19-year-old Misty Joy Henderson. The Tolono woman turned up this week after being reported missing last weekend.

Bruno also referred in general to cases where defendants who appeared guilty were found later to be, in his words, “demonstrably innocent.”

“So I just remind the public, please, allow the process to take place, unencumbered by presumptions of guilt” said Bruno. “He is presumed to be innocent. And that presumption stays with him until the very end.“

Bruno also seemed to have an international audience in mind as he went over the upcoming discovery process.

“Our system is premised on the notion that both sides will get 100 percent of the evidence, and then be able to thoroughly work through that evidence before trial” said Bruno. “There will be no surprises at trial. That’s the hope.”

But Bruno said defense attorneys were encountering difficulties in representing Christensen, because he is being held at the Macon County Jail in Decatur, a 45-minute drive from the Bruno Law Offices in Urbana. Prisoners are not allowed telephone access at the jail, and Bruno says travel times will make working with their client during the discovery process more difficult. He says there do not seem to be any other facilities where a federal prisoner can be held that would be closer to Urbana.

Yingying Zhang’s Family Increases Reward For Info On Her Whereabouts 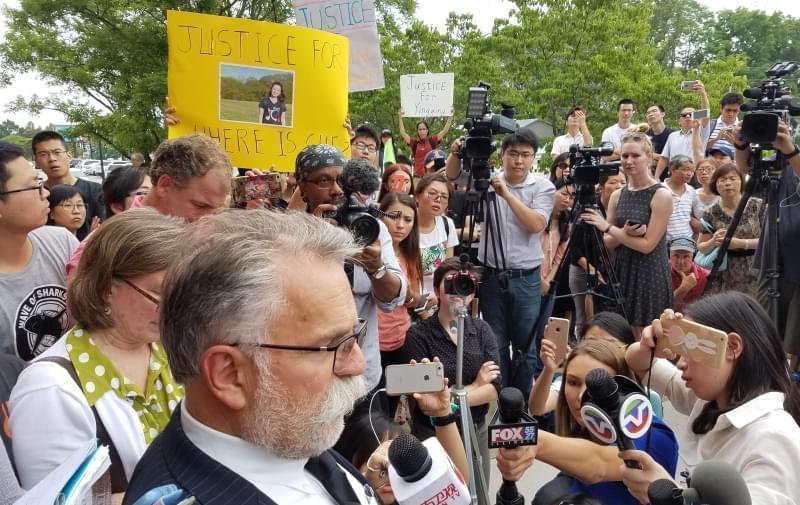